A carpenter who doused his wife, a primary school teacher, in petrol and set her ablaze in a horrific incident in Bomet county, has been charged with murder.

Robert Kipkorir Tonui, who was represented by Kericho-based advocate Brian Langat, pleaded not guilty to the charge when he was arraigned before Bomet Resident Magistrate Roseline Korir.

The suspect has been charged with murdering his wife, Emmy Chepkorir Mitei, a former deputy headteacher at Cheptalal Primary School in Konoin constituency.

He is alleged to have been committed the murder on October 7, 2020, at Seanin village, Toboino sub-location in Konoin sub-county. 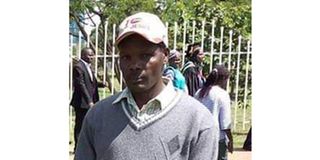 Public Prosecutor George Mureithi presented before the court a medical report indicating the accused is of sound mind and should therefore stand trial.

The deceased was laid to rest last week on Monday in Kobel village, Konoin constituency in a ceremony that was skipped by her in-laws.

Only a few family members and villagers attended the private ceremony which was conducted two days earlier than planned.

The late Ms Mitei was attacked by her on October 4, this year at her parents’ home in Seanin village, Konoin, in what resulted in 97 percent burns.

Ms Mitey, a deputy head-teacher, had left her matrimonial home after a quarrel with her husband.

Three weeks later, her husband followed her to her father’s home in Seanin, dousing her in petrol and setting her alight.

Her family said that her husband had been violent over the years.

She was rushed to Litein AIC hospital before being transferred to Tenwek Hospital where she died three days later.

Nobody really knows what transpired between the time the family finished dinner and left Emmy in her mother’s kitchen on the fateful October 3, and when Tonui entered and set her ablaze.

The family had three weeks earlier welcomed their daughter home to stay with them until she was comfortable to return to her matrimonial home.

“My sister has been having issues in her marriage for a long time,” Emmy’s sister, Susan Mitey told the Nation.

“Her husband has over the years been violent and irresponsible. She always complained that he did not help in taking care of their seven children,” she said.

Emmy, 45, had left her matrimonial home in Kobel earlier and she requested that her father, a local chief, and some elders accompany her to try and reconcile her with her husband.

“Upon arrival, her husband locked himself in the house and refused to open despite the chief and elders trying hard to persuade him. The meeting, therefore, did not take place and my parents returned home together with my sister,” Susan said.

“That night at around 9pm and after everyone had had dinner in the kitchen that is separate from the main house, it was time to retire for bed. Everyone left except my sister and her six-year-old son. The man entered the kitchen and poured petrol on her while she was sitting by the fireplace. He then lit the fire, burning her.”

Immediately after committing the heinous act, Tonui disappeared into thin air. The police searched for hiim in several places in Bomet County— including Kapset where his original home is and in Kobel, where he ran a carpentry shop.

Emmy, who was ironically the chairperson of Beacon of Hope,  an organisation that seeks to eliminate all forms of gender-based violence in Bomet, died on October 7 at the High Dependency Unit of Tenwek Hospital. “My elder sister was in excruciating pain. She went through what no human being should ever go through,” a distraught Susan said. “She was a fighter. She was a ray of hope and sunshine and we will miss her,” said Susan.

Emmy’s father, Billy Mitey, told the Nation that his daughter was unique, hardworking and a devoted Christian who did not like to see other people suffer.

“I took my daughter through college and secured her employment so she could see her children through their education. Several times I have tried to resolve their conflicts hoping they would settle and live peacefully. I am deeply pained. It is painful for any parent to lose a child. Mine is extremely painful, owing to circumstances surrounding her death,” Mr Mitey said.

The retired education officer recalled seeing his daughter in hospital, having burns all over her body. He said all he wants is justice.

He asked the police to expedite their search for the suspect and arrest him. Konoin Sub-County Police Commander Alexander Shikondi said the police were still searching for Tonui.

“The man has been on the run but DCI officers are tracking him,” he said.

Cases of domestic violence have been on the rise during Covid-19 pandemic, with some people having killed or seriously injured their spouses and children.

The State Department for Gender estimates that in Kenya, 45 per cent of women aged 15-49 have experienced physical violence, with 14 per cent having experienced sexual violence.