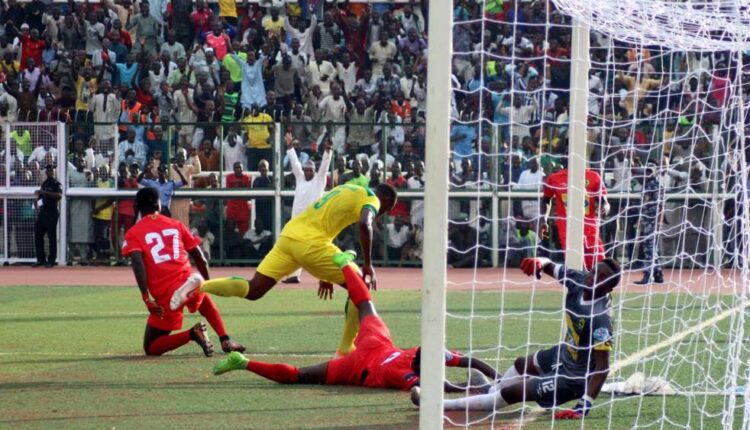 Asante Kotoko lost even more steam in their chase for the Ghana Premier League title following a 1-1 home draw with King Faisal on Saturday.

It could have been worse than it ended as Francis Andy Kumi scored late to cancel out Ibrahim Zubairu’s early opener for the away side in the matchday 32 fixture at the Len Clay Stadium in Obuasi.

Three points adrift of league leaders Hearts of Oak heading into Saturday’s game, Kotoko, who lost to their archrivals in a derby clash last week, have now reduced the gap between themselves and the Phobians to two points.

However, their inability to clinch the maximum three points on offer on the day means the Phobians may well open a five-point lead at the top of the table should they beat Ebusua Dwarfs in their matchday 32 encounter away at Obuasi on Sunday.

That would put the Phobians requiring a win out of their final two games to seal their first GPL title since 2009.

Kotoko would then have to wait for one more year for a possible first league victory since 2009.

Faisal broke the deadlock against Kotoko in the 15th minute, Ibrahim beating goalkeeper Kwame Baah with an effort from close range.

The ‘Insha-Allah’ Boys held their own until the 84th minute when they caved in as Kumi found space to plant a header into the Faisal net.

Elsewhere on Saturday, Wafa handed Inter Allies a 1-0 defeat at Sogakope to boost their top-four quest. Abdul Seidu Abu’s fifth-minute effort emerged as the separating factor, pushing the Academy Boys to third on the table. Wafa now sit just a point above fourth-placed Great Olympics and two marks above Dreams and Medeama who sit tied on 48 points.

Allies, meanwhile, were already confirmed relegated before the game following their 2-0 home loss to Liberty Professionals on matchday 32.

In a late kick-off on Saturday, Legon Cities will welcome Bechem United for a showdown at the Accra Sports Stadium. The Royals and The Hunters sit tied on 38 points but the former hold a superior position due to a better goal difference.