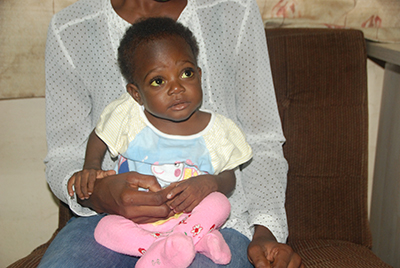 The family of a one-year-old, Gabriella Konadu Opoku, is appealing to the public to help it raise US$50,000 for her to undergo a biliary atresia surgery in India.

Biliary atresia is an anatomic malformation of the liver.

“Children with biliary atresia require early surgery to correct the anomaly as the disease is progressive in nature,” a letter under the signature of Dr Taiba Jibril Afaa, a Paediatric Gastroenterologist, at the Korle Bu Teaching Hospital, confirming little Gabriella’s condition, said.

According to the letter, though Gabriella was diagnosed of the anomaly when she was five months old, a surgery could not be performed on her because the condition was quite advanced.

“She has now developed complications of the disease for which she is being supported with medications.

”At this point, Gabriella will require a liver transplant which is not done in Ghana but can be done in countries like India amongst others,” Dr Afaa’s letter, which approved of support for little Gabriella said.

It continued: “The father has done all the necessary investigations and realised that his liver matches with the patient. He is prepared to donate a piece of his liver to save his daughter’s life and he has already started with the initial investigations for the possible transplant.

“The estimated cost of liver transplant together with transport to India for the patient, the father (donor) and mother is about US$50,000.

“We would be grateful if you could support Gabriella through her journey to transplant.”

A teary unemployed mother of Gabriella, Dina Martey, who called on the Ghanaian Times to help her solicit funds from the general public, said their little daughter is all what they have.

“Our daughter’s life is at stake and we don’t have that amount to save her life. Since she has been diagnosed of this ailment, she is unable to eat and she has constantly lost weight.

“The doctors say the surgery must be done as soon as practicable but look at me and the father, we don’t have that money. If we did, we would have no difficulty at all using our last to save her life because we don’t know what she will be for us in future,” she said as she forces to hold back her tears.