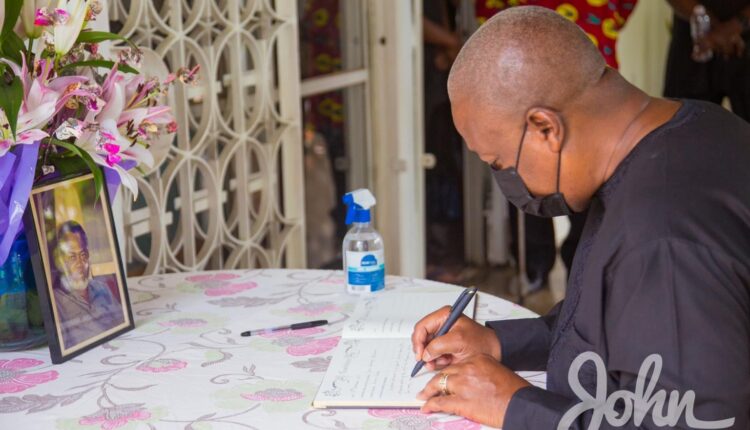 Mr. Mahama signed the book of condolence on Monday, November 29, 2021.

He said the former Head of National Security was instrumental in resolving issues bordering on governance and other related matters of the NDC.

“The passing of our senior comrade, pan-Africanist, and freedom fighter, Captain Kojo Tsikata (Rtd.) is a great loss to the NDC, Ghana, Africa, and all progressive movements across the globe.

“Captain, as he was simply referred to, contributed immensely to the development, peace, and stability of Ghana, the global liberation movement, and actually fought alongside our Cuban comrades in Angola in the war against the forces of apartheid and colonialism,” as captured in the former President’s earlier statement.

The family of the former military officer who confirmed the news said “In accordance with his wishes, the family will be making arrangements for a private family funeral”.

The ex-serviceman also served as a Head of Foreign Affairs for the PNDC.

He had been in charge of national security since 1982 and also joined the Rawlings administration on 21 January 1995.

He also served as a member of the Council of State of Ghana.

He is a close relative of renowned lawyer and prominent NDC member, Tsatsu Tsikata.

In 1995, he was asked to join a negotiating team with Ibn Chambas who was the then Deputy Foreign Minister, and Brigadier General Agyemfra, accompanied by Harry Mouzillas from the Ghana News Agency as a journalist to cover the events.

They travelled to join Mr James Victor Gbeho, the then Chairman of the Economic Community of West African States (ECOWAS) and a Resident of Flt Lt Jerry John Rawlings and Mr Ate Allotey, a diplomat.

He rejected a national award to be conferred on him in the category of the order of Volta companion under President Kuffour. He was listed as one of the six government officials under the NDC regime to receive the award.

He was appointed by Gaddafi to a senior advisory position in charge of the Al Mathaba central committee, a support centre for the liberation movement and anti-imperialist and anti-Zionist organisations.

Captain Kojo Tsikata received one of Angola’s highest honours, known as Carlos Silva among Angolan fighters, for his role in the struggle for national independence.

Tsikata was a holder of the Solidarity Award and of the Order of “Carlos Manuel de Céspedes”, conferred by the Council of State of the Republic of Cuba.