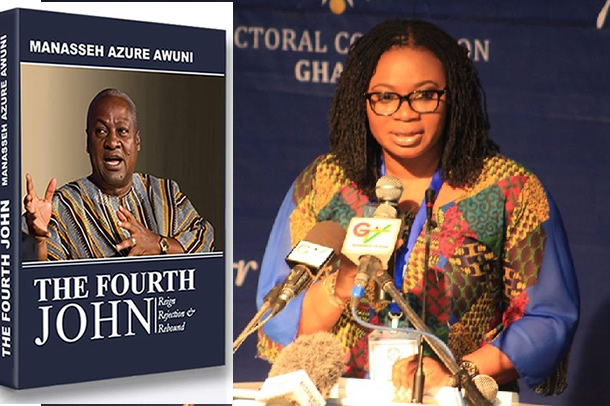 Three years on, it is emerging that the EC’s Chairperson had sought clearance from the top hierarchy of the Ghana Armed Forces before making that declaration.

Manasseh’s book reveals that when everything was set for the declaration, Mrs. Charlotte Osei called President Mahama and asked him to find out from the military high command whether it was safe to go ahead and declare the results.

When Manasseh interviewed Mrs. Charlotte Osei for the book, she explained that the declaration of the results had security implications, which was the reason she called the President to get the greenlight from the military.

“But was that the norm in a democracy like Ghana? Why would the military, which was not a party to the election, need to give clearance before such an announcement was made? If it was about security, this was an internal affair and the police were in charge of security. So why was the military’s green light required before the announcement of the results of a civilian election?” Manasseh Azure Awuni writes in the book.

“A search for answers further revealed an intriguing role the Ghana Armed Forces played and how a misstep in their operations could have marred the process,” Manasseh continues.

Manasseh revealed in the book that President John Mahama also met the top commanders of the military before conceding defeat.

“It was between President Mahama and the top hierarchy of the military at the president’s residence before he conceded defeat. The soldiers at that meeting were the CDS (the highest officer of Ghana’s military), and the commanders of the Army, Airforce and Navy. President Mahama, as the Commander-in-Chief of the Ghana Armed Forces, was there with his chief of staff, Julius Debrah, and leading members of the NDC.

“At that meeting, the military high command briefed the president and his team about the mood in the barracks, which was that the soldiers generally welcomed the change of government. Julius Debrah, according to sources, got furious and chastised the military officers for ‘allowing the NPP to rig the election’.

“He was disappointed that, as officers who he claimed owed their positions to President Mahama, they could not do anything about the situation. Perhaps, he was wrong in thinking that the soldiers should owe their allegiance to Mahama because of their positions. The Army Commander, who was at the meeting, would later be elevated to the position of CDS by President Akufo- Addo. He is Lieutenant General Obed Boamah Akwa.”

Manasseh’s book, which was launched two weeks ago, gives revealing account of the behind-the-scene happenings in the Mahama administration.

It also gives details of some important happenings in the 2016 election, including the meetings between Otumfuo Osei Tutu II, President Mahama and Nana Addo Dankwa Akufo-Addo before and after the polls.

WA
Contact Cletus at the Regional Coordinating Council. Call him on 024961007