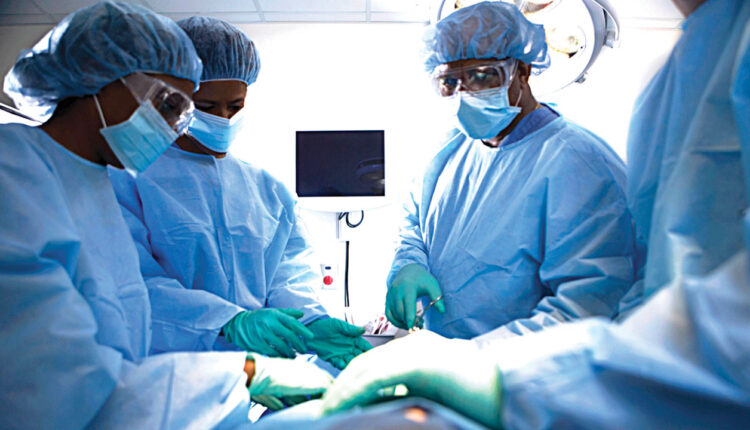 Junior Doctors Association has rejected media reports about an alleged wrong prescription by a house officer at the Manhyia Government Hospital in Kumasi.

In a statement, the association clarified that the alleged wrong prescription is false since no prescription was written for a child by the doctor on the said date.

“The doctor correctly prescribed an intravenous fluid for an adult patient in the surgical ward. The non-availability of the Intravenous fluid prescribed prompted the nurse to call the doctor to delete it from the system to avoid extra billing,” the statement explained.

The statement further added that while they do not condone the actions of the father, it is important to set the records straight on the falsehood being peddled to bring the professional competence of the doctor into disrepute.

“We, therefore, entreat all media houses to pull down their broadcast concerning the alleged wrong prescription of medication and entreat the general public to disregard such allegations against the doctor.

“Doctors and Nurses have always had a peaceful collaboration and we will continue to work as a team to provide quality healthcare to our cherished clients and the people of Ghana at large.” 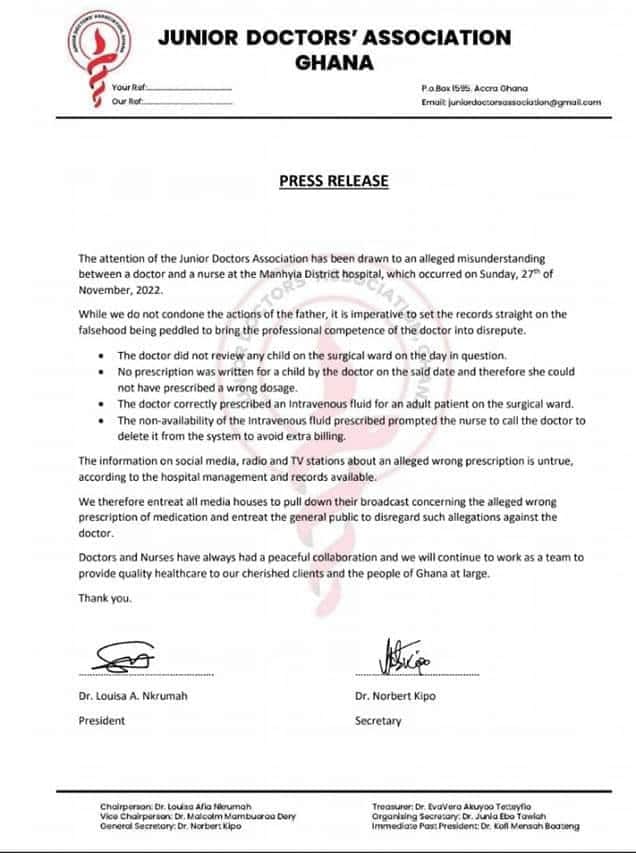 On Monday morning, the father of the house officer, who is the Ashanti Regional Director of the NSS, Mr. Opoku-Mensah verbally abused and attacked a nurse at the Manhyia Government Hospital in Kumasi.

The attack was reportedly in response to the said nurse’s alleged intimidation of her daughter.

According to the report, the nurse had called the house officer to suggest a change in prescription because what the latter prescribed was unavailable at the pharmacy, but the house officer is said to have taken offense at how the nurse spoke with her.

Mr. Opoku-Mensah who happened to be in the company of the house officer when she spoke with the nurse on phone, got infuriated by the turn of events and followed his daughter to the hospital.

In an audio recording, the angry NSS director is heard raining insults on the nurse describing her as an unqualified nurse who gained admission into a nursing training school through sexual favors.

Twenty-four hours after the incident, Mr. Opoku-Mensah rendered an unqualified apology noting that “that is not my style.”

Meanwhile, the Ghana Registered Nurses and Midwives Association (GRNMA) has called for the immediate dismissal of Mr. Opoku-Mensah.

In a statement from the GRNMA dated November 29, 2022, the leadership of the association called on the government to sack the NSS Director “having considered the audio and the report received from our Ashanti Regional branch.”

“Public Services Commission and Government, for that matter, should sack the said Regional Director immediately because he is not fit for the Director position he holds in the Public Service. He had absolutely NO RIGHT to enter Manhyia District Hospital and verbally abuse and threaten the nurse in question who was on duty at the time,” the statement read.

“We wish to state categorically that if the government does not relieve Mr. Alex Poku Mensah of his duty as Ashanti Regional Director of the National Service Scheme within 72 hours, nurses and midwives of Manhyia Hospital will be called upon to lay down their tools, followed by the whole of Ashanti Region and then it will be escalated to the whole nation.”