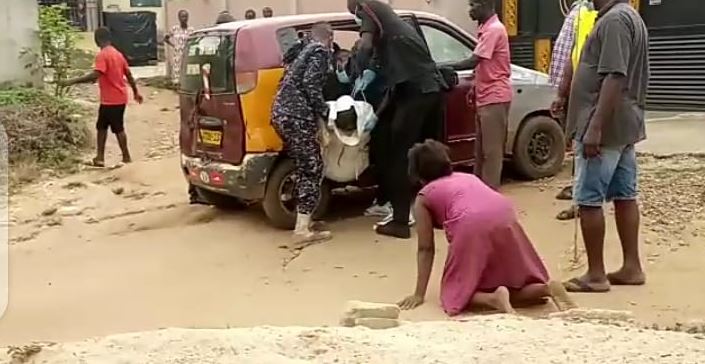 A 67-year-old woman has been found hanging in an uncompleted building at her house at Nkusukum, a suburb of Mankessim in the Mfantseman Municipality of the Central Region.

Residents suspect Auntie Aba Yaa was murdered before being hanged in the uncompleted building where the bizarre incident was discovered.

Narrating the incident, Sister Esi, a daughter of the deceased, said she woke up early in the morning for jogging, but her mother was nowhere to be found. However, she thought her mother had gone out to visit a neighbour.

After she returned from jogging, she noticed that her mother was still not in the house, so she began searching for her.

During the search, she noticed that there were signs that an activity had happened in the house. Hence she went closer and found her mother hanging.

She was hanged with a sponge sitting half naked on the floor, leaving residents to suspect she was killed.

According to her, the incident has left residents in fear. Hence they have called on the police to beef up security in the area.

Meanwhile, police in Mankessim have conveyed the body to the Cape Coast Teaching Hospital Mortuary for autopsy and Preservation.