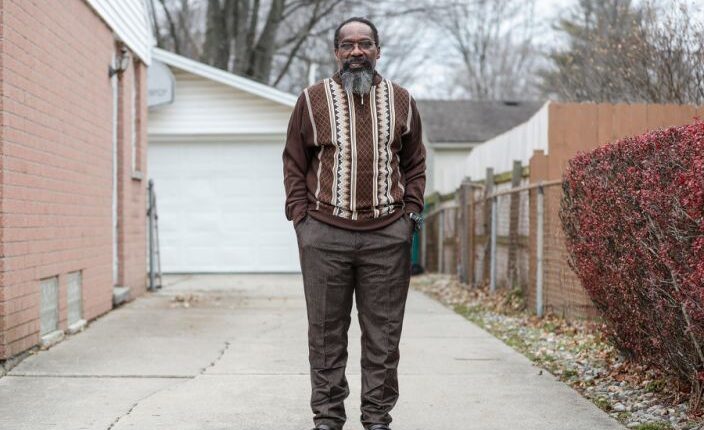 Walter Forbes was a full-time student at Michigan’s Jackson Community College in 1982. He had dreams of owning a real estate development firm after graduating.

One night that year, Forbes broke up a bar fight. He didn’t know that would change his life forever.

A man involved in the bar fight shot Forbes the next day, according to court documents.

The damage the gunshot did to Forbes’ body may have taken a few months to heal, but what happened next led to him spending nearly four decades in prison, leaving deep lifelong wounds on him and his family.

The man who shot Forbes, Dennis Hall, died in his apartment in Jackson, Michigan, in a fire that appeared to be deliberately set on July 12, 1982.

Because Hall and Forbes were recently involved in an altercation, police considered Forbes a suspect in the arson. Police arrested him at his home.

Forbes was convicted of arson and murder in May 1983 and was sentenced to life in prison.

Forbes, 63, became a free man on Nov. 20, more than 37 years after his conviction, after the prosecution’s star witness admitted fabricating her story and evidence surfaced that the fire may have been part of an insurance fraud scheme orchestrated by the apartment building owner, which led to a retrial, according to documents filed in Jackson County Circuit Court.

“It felt like all the possibilities that I was working on all those years were coming to fruition,” Forbes said. “I didn’t think it would take that long, but patience paid off.”

Key evidence used to implicate Forbes was witness testimony from a woman, Annice Kennebrew, who said she saw three men, including Forbes, burn down the century-old, two-story house-turned-apartment in Jackson.

Kennebrew’s testimony contained discrepancies, leading one of the three men to have charges against him dismissed after he passed a polygraph test and the other to be acquitted, according to court documents. Forbes was the only one convicted, probably because of the tension between him and the victim, his attorney said.

Forbes and his attorney said the burden of proof was placed on Forbes, that the jury saw him as guilty until he could prove himself innocent from the minute the trial began.

“Merely being arrested and charged suggests to the jury that something happened even though they should be scrutinizing the evidence and presuming innocence,” Forbes’ attorney, Imran Syed of the Michigan Innocence Clinic, told the Detroit Free Press, part of the USA TODAY Network. “No jury wants to believe that a prosecutor went through the trouble of bringing someone to trial if they’re truly innocent.”

Kennebrew admitted in 2017 that she had lied – that she never saw Forbes at the scene of the fire, according to court documents.

After a judge granted an evidentiary hearing in February 2020, Kennebrew testified “that she had falsely implicated Mr. Forbes because she had been intimidated into doing so by two local men who knew her from around the neighbourhood and who had threatened to harm her and her family,” according to court documents.

“Even though it took forever, I’m still grateful she did the right thing, that she did finally tell the truth,” Forbes said.

Kennebrew (whose last name was Gibson in 1982) did not return messages from the Free Press.

A witness who knowingly lied under oath could be charged with perjury, but the statute of limitations for the crime is generally six years, Syed said. A perjury charge, in this case, can be dangerous and counterproductive, he added.

“We want people who lied to come forward,” he said. “The community as a whole is harmed if lies remain hidden forever.”

As for the alleged insurance scheme, the apartment building’s owner, David Jones, was convicted in a separate arson conspiracy scheme in Livingston County, Michigan, in 1990.

A man died in the Livingston County fire as well, court documents say, and the two people who admitted to conspiring with Jones to burn the building down in 1990 told police they were aware of Jones’ role in the 1982 fire in Jackson.

Jones received more than $50,000 in insurance money for the Jackson fire, far above market value for the building. He had bought the property more than eight years before the fire but insured it only two months before the fire, according to court documents that cited reports from the fire investigator on the case.

Jones died a few years before the Michigan Innocence Clinic took on Forbes’ case in 2010. He cannot be criminally charged posthumously.

“I don’t hold contempt for the people who lied to convict me,” Forbes said. “The reason is selfish: I wasn’t going to allow them to destroy me.

Forbes is a man of few words. He takes his time to process questions directed toward him and concisely responds in his low-pitched, soothing voice.

He recoiled when asked about his faith in the American justice system.

“Calling it the justice system gives a false impression. Just using the term ‘justice’ gives you the sense that it is a just system,” Forbes said.

Black people make up about 13% of the U.S. population but account for about half of all exonerations and 54% of homicide exonerations since 1989, according to the National Registry of Exonerations.

“Up until I was convicted, I thought the system would work, that it would correct itself. In hindsight, I was naive,” Forbes said.

Forbes’ manner isn’t one of someone who is spiteful, rather it’s of a man who worked to find inner peace.

He spoke about a few things that helped him get through the over 13,000 days and nights in prison.

“I always knew what the end result was going to be, but I had no clue what I had to go through or who was going to be of help along the way,” Forbes said. “Surest thing I knew was I had to keep moving forward.”

It wasn’t until November he realized it was actually happening – that he was going to be a free man and that his name would be cleared.

Forbes spoke with his family often while in prison: sometimes weekly, sometimes several times a day. He knew that he would have a support system once released, and that gave him comfort, he said.

“Seeing my family for the first time, it was one of those moments where all you can do is grin,” Forbes said.

Forbes is staying with family in metro Detroit and plans on visiting his mom, 94, in Mississippi in the coming weeks. He had planned to see his mother right away but thought it would be best to do what he had done for the past four decades: patiently wait, in this case, for COVID-19 infection rates to decrease.

A family to tend to

Forbes is now the patriarch of a family that had been missing one, his relatives said. His wisdom and insight is revered.

“He’s been able to bring a lot of our family together already – family I didn’t really know before,” Forbes’ nephew, Imil Forbes, 40, said. “We’re now getting together and creating a strong bond.

“We needed him out here for us to come together like that.”

Forbes’ biological son, Runako Forbes, 42, hadn’t gotten to know his father until he was 13.

Runako was adopted. He didn’t fully comprehend where Forbes was and why until meeting him as a teenager.

Runako recounted meeting his dad for the first time: “There were a lot of people in the visiting room. I remember looking over my shoulders, seeing him and knowing that he was my dad. I had never seen a picture of him before, but in my heart I just knew that was him. He finally came up to me and hugged me. I knew I was right.”

He said he loved his father before he had ever met him, and that once he understood the situation and knew that his father was innocent, he grew angry.

“I can’t pretend like there wasn’t a lot of bitterness I had toward the world,” he said. “But I try to go more off his demeanor. He’s more patient than me. He would never say ‘couldn’t’ or ‘can’t.’ ”

Liberated but not yet independent

Forbes’ first order of business as a free man is to become independent with the help of his family and adjust to a world much different than the one he knew before being locked up, he said.

Readjusting won’t be seamless, Forbes said. For instance, a piece of technology so essential to our daily lives hadn’t existed before his conviction.

Forbes laughed when talking about smartphones.

“I might spend half an hour figuring out what takes someone else 20 seconds,” he said. “I’ll be missing calls because the phone be acting up on me. I don’t know how to operate it yet.”

But he reflects on his time in prison, when he would hear people’s problems in the outside world and wished his problems were as trivial.

“The challenges of readjusting to life outside prison, I see it as part of the process,” Forbes said. “I recognize what I can control and can’t, and when I do see challenges, I don’t stress and I try to find a solution to them.”

Forbes is more focused on the luxuries absent in prison that he can now access.

“A lot of things you don’t realize you miss because they just faded away,” he said.

Once somewhat readjusted, Forbes wants to be an entrepreneur, collaborating with friends on their existing companies. He’s especially interested in construction.

Chiefly, he said, he wants to ease suffering in the world and spread good where he can.

“I am still trying to figure out the most effective way to help others,” Forbes said.

Forbes said that upon his release, his thoughts were directed toward the prisoners of Kinross Correctional Facility, the last of about a dozen facilities he was imprisoned at and where as of Dec. 4 there were over 1,000 active positive coronavirus cases, according to Michigan Department of Corrections data.

Michigan in 2016 passed a law that allows wrongfully convicted people to receive $50,000 for each year they were imprisoned. Having been convicted for over 37 years, Forbes is entitled to nearly $2 million in compensation from the state, but the money won’t come for months, Syed, his attorney, said.

Forbes said the wrongfully convicted must keep a positive mindset and remain motivated to uncover the truth.

“Work harder on your case than anyone else,” he said. “You have to be the driving force behind your own liberation.”