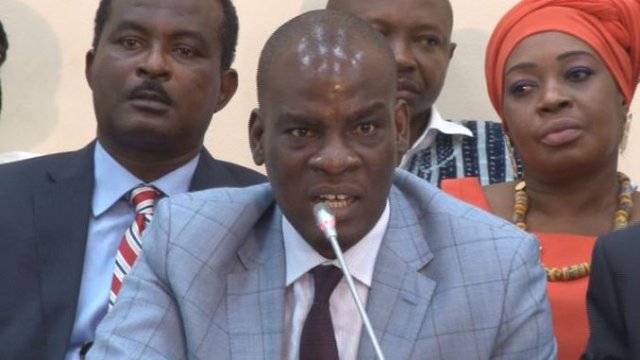 Government has insisted the deal to leverage mineral resources in exchange for development finance is in Ghana’s interest.

But the Minority in Parliament remain unconvinced, citing a lack of transparency in putting together what is known as the Agyapa deal.

The NDC MPs in Parliament have therefore threatened to write to the London Stock Exchange about the controversial Agyapa Royalties deal.

“We will today [Tuesday] put the London Stock Exchange and the Financial Conduct Authority on notice that this agreement does not meet the minimum requirement of diligence and transparency and minimum requirements of our constitution,” Mr. Iddrisu said.

The Minority wants to make clear its belief that “this agreement is tainted with some corrupt acts.”

The Minority has also called for an independent probe into the valuations of royalty rights in the Agyapa Royalties deal.

At a press conference on Tuesday, the Minority Leader Haruna Iddrisu insisted that Ghana’s assets have been grossly undervalued in the agreement.

“The worth of our gold revenue and their projects needs a further thorough probe by independent economic transaction advisors for us to appreciate that they [Government] are not ripping this country off,” he said.

He made reference to the Power Distribution Services deal which was abrogated after it took off because of purported fraud.

“Agreements similar to this one will walk on the same path tomorrow,” he stressed.

The minority had earlier boycotted the approval of the agreement when the subject matter was raised in Parliament.

They expressed fears that the government appeared to be hiding the directors involved in the said deal.

The Minority also cautioned that the Agyapa Royalties, Special Purpose Vehicle deal could be used as a conduit for money laundering.

Among the issues outlined by the Minority Leader were issues of conflict of interest and procurement malfeasance.

He added clarity on the procurement for Africa legal Associates, which has Gabby Asare Otchere-Darko as a partner, to consult on the deal, among other legal entities named.

READ ALSO: Agyapa Royalties Deal – I am proud to be part – Gabby

“How were they procured and how much have they been paid and whether this was done competitively and advertised for the good people of Ghana.

“We also want to know the cost of the transaction and how much has been paid to those firms and why the choice of the Senior Minister’s son,” Mr. Iddrisu added.

In 2018, Parliament passed the Minerals Income Investment Fund Act which establishes the Fund to manage the equity interests of Ghana in mining companies and receive royalties on behalf of government.

The purpose of the fund is to manage and invest these royalties and revenue from equities for higher returns for the benefit of the country.

The government then, through the Minerals Income Investment Fund (MIIF), set up Agyapa Royalties Limited to monetise Ghana’s gold royalties.

This was after Parliament on August 14, approved the Agyapa Mineral Royalty Limited agreement with the government of Ghana despite the walkout by the Minority.

In exchange, the company plans to raise between $500 million and $750 million for the government to invest in developmental projects.

Below is the full speech

Poverty and youth unemployment major instruments for conflicts in Africa –…