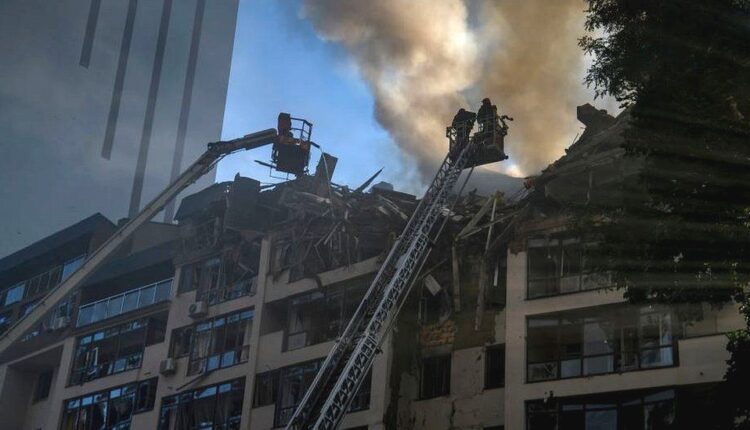 Dozens of Russian missiles have struck targets across Ukraine, with the capital Kyiv enduring the heaviest barrage in months.

A Kyiv apartment block was destroyed, killing at least one and wounding six others including a seven-year-old girl.

Ukraine says 14 missiles were fired at the Kyiv region on Sunday, but the strikes extended far beyond the city.

Other areas included the central city of Cherkasy, where one person died, and the north-eastern Kharkiv region.

The strikes came as leaders of the G7 group of the world’s richest nations began a three-day summit in Bavaria, southern Germany, with the war in Ukraine top of the agenda. They are expected to promise further military support for Kyiv and impose more sanctions on Moscow.

“We have to stay together,” US President Joe Biden told Germany’s Chancellor Olaf Scholz just before the summit at Schloss Elmau.

“[Russian President Vladimir] Putin has been counting on it from the beginning, that somehow Nato would, and the G7 would splinter and… but we haven’t, and we’re not going to.

“So, we can’t let this aggression take the form it has and get away with it,” President Biden said.

BBC diplomatic correspondent James Landale, who is at the summit, says Western unity over the war has faltered in recent weeks, with some leaders discussing long-term relationships with Russia and others stressing strong, lasting support for Ukraine.

But the G7 leaders meeting in Bavaria were determined to put those divisions to bed, our correspondent adds.

In Kyiv, a large blast crater was gouged in a nursery school playground, near a nine-storey building whose top floors were ripped apart. The injured girl’s mother – a Russian citizen – was also pulled from the rubble and taken to hospital, officials said.

They said the girl later underwent a surgery and was “in stable condition”.

The Russian defence ministry said high-precision weapons struck Ukrainian army training centres on Sunday in the regions of Chernihiv, north of Kyiv, and Zhytomyr and Lviv west of the capital.

The strike on Starychi district in Lviv was just 30km (19 miles) from the border with Nato member Poland.

Kyiv Mayor Vitaliy Klitschko said the attacks were an attempt to intimidate Ukraine ahead of this week’s G7 summit.

The last major Russian missile strike on Kyiv was on 5 June when a railway repair facility was hit.

Russia has become internationally isolated through far-reaching sanctions since its 24 February invasion of Ukraine.

After big early setbacks, Russia has made some advances in the east despite fierce Ukrainian resistance, and on Saturday finally captured Severodonetsk, a city now in ruins.

Military analysts say it is now a war of attrition in the industrial eastern Donbas region, though Kyiv’s forces are outgunned by Russian artillery and missiles.

Ukraine has urged the West again to speed up deliveries of heavy long-range weapons.

UK Prime Minister Boris Johnson met French President Emmanuel Macron at the G7 summit. A spokesperson for Mr Johnson said “they agreed this is a critical moment for the course of the conflict, and there is an opportunity to turn the tide in the war”.

They agreed to sustain military support for Ukraine, and Mr Johnson “stressed any attempt to settle the conflict now will only cause enduring instability” by giving “licence” to President Putin. He said leaders must be honest about the war’s rising costs, but the price of Russia succeeding was “far higher”.

“We are united by our world view and by our belief in democracy and rule of law,” he said.