The Western Regional Security Council has appealed to the general public for calm as police carry out DNA tests on human remains suspected to be those of three missing girls in the Western regional capital, Takoradi.

In a signed statement by the Regional Minister and Chairman of the security council, families of the missing girls are being asked to remain calm even as the Police conduct further investigations and forensic tests.

The statement goes on to say the public should assist the Police administration with any information that will help unravel the mystery surrounding the kidnapping of the three girls.

In a joint Police operation on August 2, human remains were found at the backyard of the prime suspect in the disappearance of the three girls.

Mantebea Koranchie, 15, Ruth Love Quayson, 18, and Priscilla Blessing Bentum, 21 have gone missing for nearly a year after they were reported missing in the Takoradi metropolis.

Below is the statement from the Regional Chairman 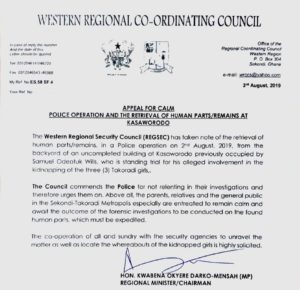