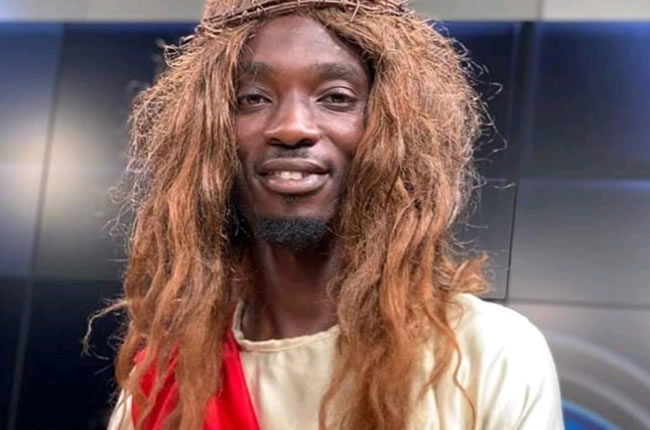 Mmebusem mocking Jesus and so what?

A comedian, Ghana Jesus Mmebusem, has hit the Ghanaian entertainment scene depicting the person of Jesus in ways that can simply be described as mockery. Unsurprisingly, some Christians, including some Pastors have taken issues with the comedian and are calling on him to stop mocking Jesus. As a Christian, I am indeed not enthused by this comedian and I don’t watch his video.

However, my greatest surprise is not with the comedian and his acts, but rather those Christians issuing a call for him to stop mocking Jesus.  One Pastor, Brian Amoateng on his facebook page is reported to have posted his disagreement

Enough of this nonsense. I don’t support this …. Christian Youth of Ghana, our God cannot be mocked in the name of comedy.

Firstly, the language “Enough of this nonsense” points to a man who has had enough of the comedy series. Perhaps he has been watching too much of it and has been boiling within. I can’t tell.  But, if it is the case that he has had enough by watching or seeing this video, my advice to him will be to ignore the video. Stop watching it if you don’t support it.

Reading through all the protest going on against Mmebusem, I have been wondering what Christians are expecting from the world towards Christianity. Are we expecting the world to hail us and sing our praise? Mocking Jesus is not a 21st Century phenomenon. In fact, many centuries before he was born, it was prophesied of him that he will be mocked and rejected: “He was despised and rejected by men; a man of sorrows, and acquainted with grief, and as one from whom men hide their faces he was despised, and l we esteemed him not.” (Isaiah 53:3).

Throughout his earthly life, Jesus was mocked and rejected by the Jews and Pharisees. He didn’t call on anyone to take action. In fact, the peak of his mockery and rejection was on the cross; when a man without any guilt was pronounced guilty and killed. And on the cross, he was taunted at:

And when they came to the place that is called The Skull, there they crucified him, and the criminals, one on his right and one on his left. And Jesus said, “Father, forgive them, for they know not what they do.” And they cast lots to divide his garments. And  the people stood by, watching, but the rulers scoffed at him, saying, “He saved others; let him save himself, if he is the Christ of God, his Chosen One!” The soldiers also mocked him, coming up and offering him sour wine and saying, “If you are the King of the Jews, save yourself!”  There was also an inscription over him, “This is the King of the Jews.” One of the criminals who were hanged i railed at him, saying, “Are you not  the Christ? Save yourself and us (Luke 23:33-39).

Jesus Christ came to die for sinners—including those who presently mock him. It was this same rejection that led to his crucifixion, burial and resurrection which anyone who believes in him will be saved. In his rejection, Jesus didn’t curse the people or become angry. Rather, he prayed for them: “Father, forgive them, for they know not what they do.” Let’s follow in the footsteps of our saviour and pray for forgiveness for this gentleman.

Christianity and its teachings throughout human history has been marked with persecution, mockery and rejection of what we believe. That however has not weakened the church. The real problem of the Ghanaian church is not a comedian mocking Jesus. The real problem is Pastors who mount pulpits and teach false doctrines. If we want mockery of Christ to stop, let our pulpits preach the truth—the gospel that saves sinners from their sins.

By the way, are we expecting that the world will praise us for our faith? That is asking too much of them. For the message of the cross is foolishness to the world. Stop asking for reverence from where reverence isn’t expected.