The country’s total mobile voice penetration reached 41,017,822 at the end of January this year.

A report from the National Communications Authority (NCA) revealed that the percentage increase between December 2021 and January this year was 1.39 per cent.

Subsequently, MTN’s market share for the month under review stood at 59.70 per cent, making it the most dominant player in the highly competitive industry. 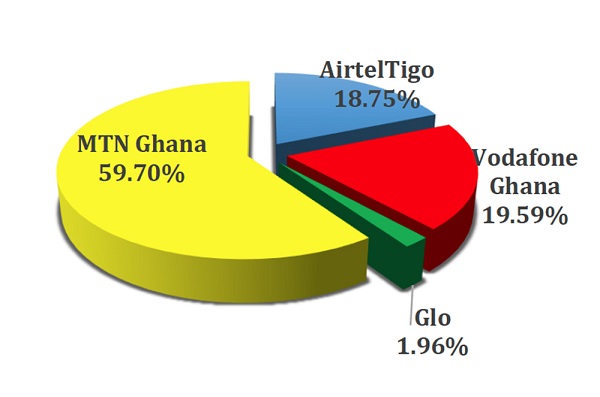 That represented a percentage decrease of 2.60 per cent. Vodafone, however, maintained its spot as the second biggest in the industry by market share, with 19.59 per cent.

That reflected a percentage decrease of 4.98 per cent. Its total market share for the month under review was 1.96 per cent.

The increase in subscriber numbers is a reflection of the growth in the sector.

However, the impact is not as meaningful as it is expected because many subscribers even in the urban parts of the country still have challenges with poor network quality for calls and internet use.

There is the need for interventions from the industry regulator to get the players to provide good network quality at all times to help boost economic activities in the country.

Some subscribers have also expressed discontent about poor call set up and the growing number of messages of all kinds from various sources which they claim disturb their privacy.

They have also alleged that they are charged for various services they have not subscribed to and wonder why the industry regulator seems quiet about an unfortunate development which can best be described as ‘robbery’ and an abuse of the subscribers.

Cedi likely to strengthen against dollar amidst debt sustainability outlook