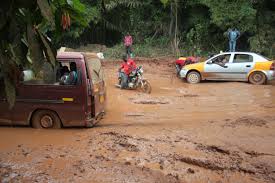 It was in China that I realised that one could go to bed in a desert and wake up in a forest. The Chinese capital, Beijing, is full of trees on life support. Trees (not seedlings) are uprooted from the nurseries , planted and held down by poles.

Such is the Chinese ingenuity that lands that fail at producing food crops and vegetables are turned into nurseries that feed the greening agenda in cities.

When I visited the world’s most populous country in May last year, there was one particular road we used every day. By the seventh day, the place had changed—there were canopies of shrubs everywhere. Apart from the sign directing us and the buildings in the vicinity, I would have challenged even the Chinese Premier that it was not the route.

For years, residents of Tantra Hill and its environs have been driving over magnified egg crates disguised as roads. We drive (those with salon vehicles that can’t conquer potholes) gripping the steer like we are about to fall into the pit of hell.  While at it, the vehicle will be swinging like an ecstatic choir member.

I don’t know how many babies have been ‘miscarriage’ on that road, neither do I have evidence of the number of old and young that require massage after driving on that road.

But I know one thing for sure, our shock absorbers have always moved a step closer to a replacement, every time we used that shorter route home.

So, I was pleasantly surprised to see the road flattened and motorable—its’ rough and bumpy  edges are gone. What stays with us, however, is the dust. No problem, I can roll up, my window. The only problem is when the rains set in next year, I’ll have to change my route  to reduce the tear and wear.

But I found the timing of the grading of this road very intriguing. It coincided with the President’s tour of Greater Accra. As if to drum home his year of roads agenda, it was a tour that took him to communities with the most deplorable roads in the region.

While I should be excited about the neatly graded road, I am not. Why must we wait until a presidential tour before we grade or construct roads?

The people of Tantra Hill are not alone in this. For years, Teshie residents  have been angry and spitting fire about their deplorable LEKMA road

The 7.5-kilometre stretch, which connects the Spintex Road to the Accra-Tema Beach road has stalled since 2016.

But guess what? Residents woke up to a thick asphalt coat on the road.  The dust is gone. The road is blocked, waiting for presidential inspection.

My colleagues in Kumasi also shared similar tales when the President toured the Ashanti Region recently. It is so with scores of communities across the country.

In the heat of the 2016 elections, a friend slept and woke up to the hissing  sound  of earthmoving equipment in Haatso. Another person has to park her car at a fuel station because when she returned from work, the road leading to her home has been blocked for nocturnal construction work.

In all these, there is a common denominator—elections. Politicians are addicted to electoral numbers and will do anything to shore it up.

It is the only reason my road which has been breaking my back and giving me aches will be graded when the President is subtle campaigning, under the guise of touring the country.

But who am I to complain, given the benefit of coming to my quiet neighbourhood?  My only request is Mr President, go on more tours. In fact, do it daily, for there are buried benefits.