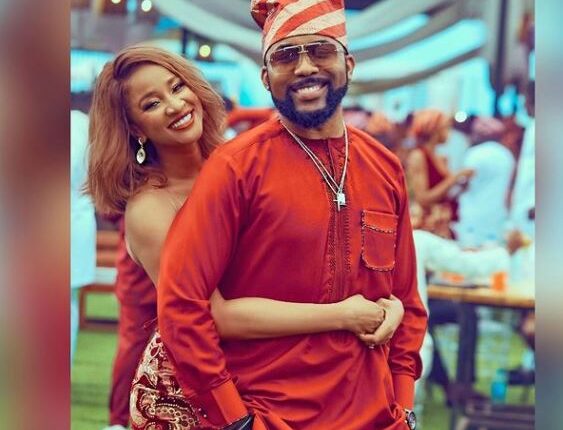 Adesua Etomi, the Nollywood actress and wife to Nigerian musician and politician, Banky W, has revealed that if she had not married her husband, she would most likely be living a life of black and white.

She made this confession on Instagram as she showered Banky W with sweet words on their wedding anniversary.

‘’You will always be my favorite part of me ”. Without you, I’d be living in black and white. Baby daddy, my Zaddy, you mean the world to me. Happy 4th Year Anniversary Bubba. I love you. Forever. Truly, madly, deeply.” Adesua posted.

In other news, it will be recalled that last week, celebrity lovebirds, Adesua Etomi and her husband Banky W, once again came together for a creative project that sent their fans, colleagues gushing on social media. The husband and wife known to work together on several occasions were spotted in the official music video for Banky’s song, Jo, where Adesua exhibited her dancing skills.

Nigerian music superstar Tems is set to headline her first concert in Nigeria in two years on December 16, 2021, at the Livespot X Festival. The artist who is fresh off hugely successful bodies of work will be performing at the first-ever week-long concert experience in Lagos.

Just on Tuesday, November 23, 2021, Tems bagged the 2022 Grammy nomination award ” Best Global Music Performance” category for a feature on Wizkid’s smash tune “Essence”. Still reeling off of the excitement of her album “If Orange was a Place”, a Billboard Hot 100 hit song, several nods from BET, MTV, The Headies, and a Drake feature, Tems is one of the fastest-rising acts out of Africa and the song “Essence”, featuring her, also became the first Nigerian song to spend a year on Billboard World Album charts.

Tems will build on the success of past editions of Livespot360’s produced concerts featuring Kim Kardashian, Ciara, Cardi B and more as she has assured that her music lovers and fans will be treated to her best performance yet at the concert “A Place Called Orange,” taking place at the Live spot Entertainment Center in Lagos. In her words “LAGOS All I can say is it will be special”.

Livespot360 has also revealed that the Livespot X Festival will give Nigerians an exciting end to the year while being fully compliant with the current pandemic era. The concert series which is targeted at a diverse audience will feature concert days tailor-made to suit different categories of attendees with exciting multi-sensory experiences and several established artists billed to perform.