According to Information Minister-designate, Kojo Oppong Nkrumah, such a plan is “not a matter on his [President Akufo-Addo’s] cart.”

Nana Addo Dankwa Akufo-Addo and a six-member delegation that traveled with him to the United States escaped what could have been a fatal accident with the Presidential jet in Washington, when one of the jet’s engines went off few minutes after takeoff on their way to Ghana.

The aircraft had to fly around a number of times to burn fuel before being assisted to land. 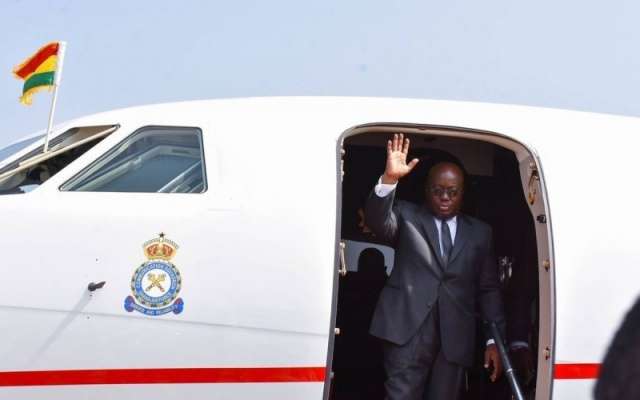 The Information Minister designate told the media on Sunday that the president and his six-member delegation arrived safely in Ghana on Sunday via a South African Airways aircraft.

The presidential jet had encountered similar challenges in the past – in 2014 and 2015.

Despite this history of the jet, Kojo Oppong Nkrumah at the press conference said buying a new one is not something the president is considering.

“I can tell you that the presidential jet returned very recently from its maintenance and servicing schedule so it’s a being maintained and serviced in accordance with its schedule. I haven’t spoken to the president as to whether or not he intends to buy a new jet, but I can tell you that the man I know who is still using his own private vehicle even for official travels, does not have this matter on his cart. This is not a matter on his itinerary to buy a new jet,” he added.

Oppong Nkrumah said the President Akufo-Addo arrived safely in Ghana at 8:00 am on Sunday.

“…The president and his delegation got onto a commercial flight, a South African Airways flight and arrived in Accra at 8:00 am this [Sunday] morning. The trip was successful all in all,” he added.

Nana Addo at the UN

President Nana Akufo-Addo was at the UN on Wednesday, September 26 where he addressed the 73rd UN General Assembly.

His address touched on the anxieties concerning China’s forays into the developing world, the need for UN Reform, the wider vision of an Africa Beyond Aid, and the recent passing of former UN Secretary General, Kofi Annan.