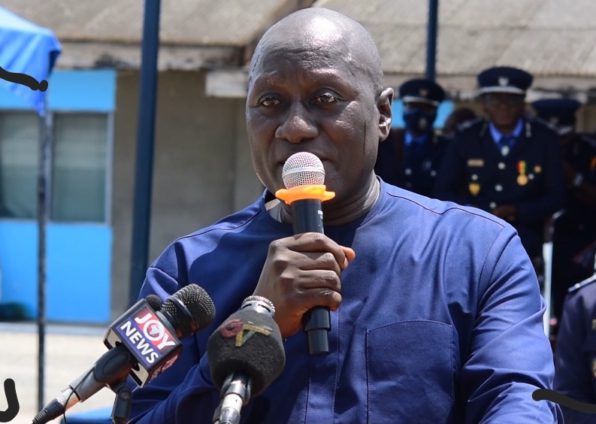 Some senior officials of the Customs Division of the Ghana Revenue Authority (GRA), including the Commissioner, Colonel (rtd) Kwadwo Damoah, have been cited by National Security for aiding importers in evading tax to the tune of millions.

A letter signed by the then Deputy National Security Coordinator Edward Asomani in October 2021 revealed gross under-declaration of goods by some trucks under the watch of Col Damoah.

According to the letter, dated Thursday, 21 October 2021, a Customs Intelligence team led by John Agbawu, with assistance from operatives of the National Intelligence Bureau (NIB), intercepted the two cargo trucks at Dzorwulu, near the Fiesta Royale Hotel in Accra.

The cargo trucks were suspected of having under-declared and misdescribed their goods at the Aflao border.

Upon arrest, the trucks with registration numbers GW 6957-13 and GT 8502-16 were escorted to the Customs Laboratory Division at the Kotoka International Airport Roundabout for re-examination.

“It was revealed, after the re-examination, that a substantial number of goods in the trucks were undeclared and thus, no duties were paid on same,” the letter said.

But during the interrogation, the traders were said to be discourteous towards the officers, with one allegedly placing a call to Colonel (rtd) Kwadwo Damoah, the Commissioner of Customs of GRA.

Subsequently, a Staff Officer to the Commissioner, Kojo Bonsu, instructed the arresting officer to release the trucks unconditionally.

Colonel (rtd) Kwadwo Damoah has recently been in the news after a report by the Special Prosecutor implicated the office of the Commissioner of the Customs Division of the Ghana Revenue Authority in corruption-related activities involving Labianca Company Limited.

The OSP recovered GH¢1.074,627.15 million from the company owned by a Council of State member, Eunice Jacqueline Buah Asomah-Hinneh.

A Deputy Commissioner of Customs in charge of Operations, Joseph Adu Kyei, was also cited by the OSP for issuing what it described as an unlawful customs advance ruling.

But, Col. Damoah took exception to this position and accused Mr Kissi Agyebeng of attempting to tarnish his image, following which the OSP called for all documents related to similar transactions by 30 September.

1. Reports indicate that a Customs Intelligence team of the Customs—Division of the Ghana Revenue Authority (CD-GRA) led by John Agbawu, with assistance from operatives of the Special Monitoring Team (SMT) of the National Intelligence Bureau, on 08/10/2021, intercepted and arrested two cargo trucks at DZORWULU traffic Light, near Fiesta Royale Hotel in Accra on suspicion of under-declaration and misdescription of goods.

2. Gathered, the trucks, with registration numbers GW 6957 -13 and GT 8502 -16 from AFLAO, upon arrest, were escorted to the Customs Laboratory Division at Airport Roundabout for re-examination.

4. It needs stating that, during the interception, the traders were discourteous towards the arresting officers, with one of them allegedly placing a to Col. DAMOAH, Commissioner of CD-GRA. Subsequently, AGBAWU received a call from one Kojo BONSU, Staff Officer to the Commissioner, instructing him to release the trucks unconditionally.

5 Further, AGBAWU received another call from Adu KYEI, Deputy Commissioner of Operations, CD-GRA. who also gave similar instructions. Additionally, the trader who placed the call to Col, DAMOAH, recorded the arresting officers on video to be forwarded to him.

6. Given the implications of this development, particularly those related to tax evasion, on the domestic revenue mobilization efforts of GRA, your outfit is urged to investigate the matter and update this Ministry accordingly.

7. Your outfit is further urged to take necessary steps to prevent senior officials from undermining the work of customs officers at the various custom checkpoints across the country.