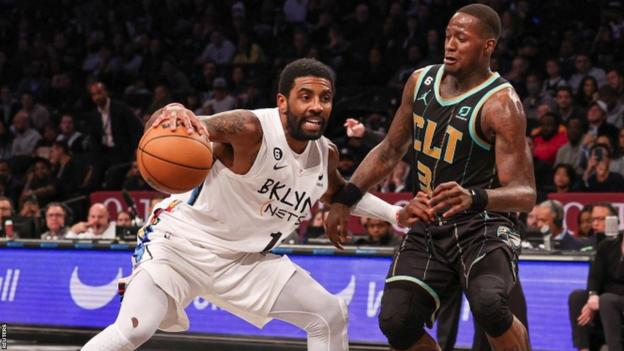 Kyrie Irving scored 33 points and made nine assists as the Brooklyn Nets held on for a 122-116 win over the Charlotte Hornets in the NBA.

The Nets set a season high for points in the first half to lead 73-55 as they bounced back from Sunday’s 103-92 loss to the Boston Celtics.

They are fourth in the Eastern Conference with a 14-12 record.

The Boston Celtics cemented their spot at the top of the Eastern Conference standings with a dominant win 125-98 at the Phoenix Suns.

Josh Okogie scored 28 points for the Phoenix but five players reached double figures for the Celtics, with Jaylen Brown and Jayson Tatum each scoring 25 points as the Celtics improved to 21-5.

Giannis Antetokounmpo, the NBA’s two-time Most Valuable Player, scored 35 points and Jrue Holiday 31 as the Milwaukee Bucks pulled away late to beat the Sacramento Kings 126-113 and move to 18-6.

The New Orleans Pelicans now have the best record in the Western Conference after holding off the Detroit Pistons for a 104-98 home win.

Rookie Simone Fontecchio made a last-second game-winning dunk as the Utah Jazz scored five points in the final 7.8 seconds to earn an improbable 124-123 win over the Golden State Warriors.

Jordan Poole made one of two free throws with 13.3 seconds remaining – he scored 36 points in the game – to give the Warriors a four-point lead.

But Malik Beasley hit a three-pointer before Nickeil Alexander-Walker stole the ball from Poole with 4.3 seconds remaining to set up Fontecchio.