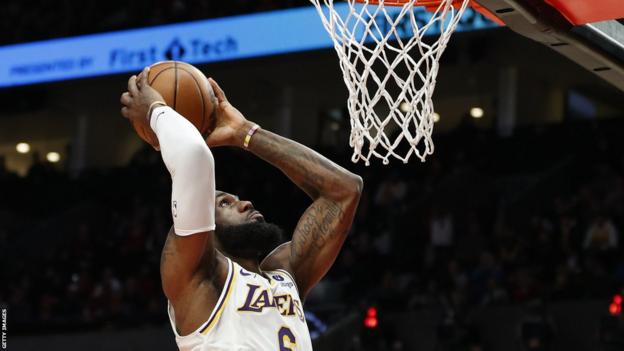 Trailing 71-46 at the break, the Lakers outscored the Trail Blazers 75-41 to equal the second-biggest second-half comeback in franchise history.

“You can either go out, lay down and get ready for the next game or you can see what happens in the third quarter, make a game of it,” James said.

Anfernee Simons top-scored with 31 points for the Trail Blazers, who suffered a third straight defeat and have lost 12 of their last 16 matches.

There was another dramatic comeback in San Francisco as Kyrie Irving scored 38 points to inspire the Brooklyn Nets to a 120-116 victory over NBA champions the Golden State Warriors.

Two free throws by Stephen Curry gave the Warriors a 116-115 lead with just one minute 12 seconds to go.

However, Irving’s ninth assist of the night set up Royce O’Neale for a three-pointer before he scored a pair of free throws himself to seal the win.

“Kyrie had been getting to the basket, hitting tough shots and at that moment, he drove, two people double-teamed and he found me open,” said O’Neale. “I just needed to have the confidence to knock it down.”

Irving added: “Royce being wide open, I felt like that was the best shot for our team so I gave up the ball, trusted him to make it and luckily it went in.”