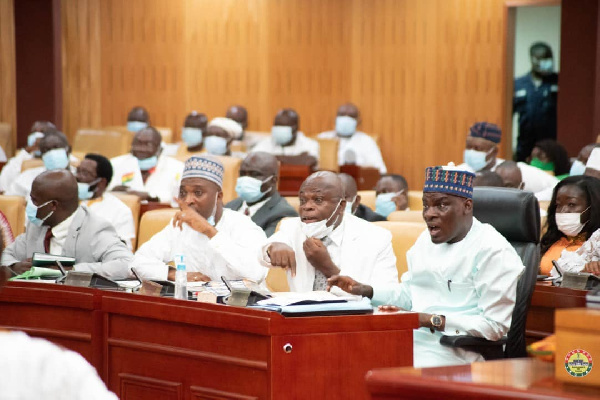 The opposition National Democratic Congress (NDC) has revealed that it is considering reconstituting its leadership in parliament.

According to the party’s General Secretary, Johnson Asiedu Nketsia, this happens after every general election.

However, the changes have not been made in this current eighth Parliament due to the NDC’s litigation over some parliamentary seats.

Mr. Asiedu Nketia said “there is some work in progress. After every election, we reconstitute the leadership of Parliament even if it means reconfirming them. We haven’t done that yet because of the court cases.

“We started but got to a point and felt that we need to finish with the court cases first. So it is something we are considering. But there will be a definite statement. I am sure by the time, they [Parliament] return from the break, we would have taken this decision”.

After the NPP and NDC split the seats in the House, a section of the public was optimistic the NDC would put the government on its toes to ensure accountability.

But the approval of the 2021 budget and ministers-designate flagged by the NDC, dented the party’s ability to ensure scrutiny in the house.

The latest incident to rock the boat of the NDC leadership in parliament is the unanimous approval of Minister of Finance, Ken Ofori-Atta, and the subsequent resignation of NDC MP, Samuel Okudzeto Ablakwa from the Appointments Committee.

Mr. Ablakwa’s resignation has sparked concerns among the party.

Some party members have called for an overhaul of the NDC leadership in parliament.

National Communications Director of the party, Sammy Gyamfi, took the minority leader, Haruna Iddrisu; Minority Chief Whip, Muntaka Mohamed Mubarak; and the Speaker of Parliament, Alban Bagbin to the cleaners, accusing them of betraying the party for allowing some of the nominees to be passed.

Touching on concerns that the Minority caucus in the Parliament has not been serving the party’s interest during the ministerial approval, Johnson Nketia admitted that the development was problematic.

“We were all worried about our side passing some of the nominees. We thought that this was the time for us to exact accountability from them, but things didn’t work out the way we expected.

“It nearly created a problem for our leadership and the leadership in Parliament. We were just shocked that all of them had been passed. But it was a collective failure,” he noted with dismay.

Mr. Asiedu Nketia said there is a high possibility that things will change for the better in the coming days.

He said the party still has high hopes of becoming the majority in Parliament after the adjudication of the court cases.

“We have eight cases in court now, so we are very confident that our majority status will be restored after the adjudication of those cases. If it flips now, Haruna [Iddrisu] will become the majority leader, and it will change a lot in the house.

“Unless there is executive pressure on the court, we believe in the strength of our cases. We are keenly following what is happening, and we are very positive”, he said.