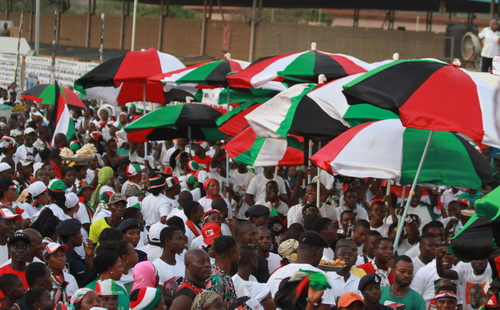 The National Democratic Congress [NDC], has set 28th of December for the conduct of its parliamentary primaries in the Ayawaso West Wuogon constituency ahead of the impending by-election.

According to the party, four persons including actor John Dumelo and the 2016 parliamentary candidate, Delali Kwasi Brempong, have picked up nomination forms to contest the elections.

The by-election has been necessitated by the death of the New Patriotic Party (NPP) MP, Emmanuel Agyarko.

Speaking to Citi News, Chairman of the NDC in the Ayawaso Constituency, Bismarck Aborbi Aryeetey, said they will do everything possible to capture the seat.

“Currently, four people have picked nominations forms so far. Our former candidate who contested in 2016, Delali Kwesi Brempong is in there. We also have Ekow Acquah and John Dumelo. These are the initial three people who picked the forms. I am also told that one gentleman called Ewoenam has also gone for forms.”

“Today, [Wednesday], we are ending the whole process so they submit the forms on Saturday. On Sunday, we will have the vetting and prepare for the primaries on the 28th of December for us to have a candidate who will lead the party in the by-election, he added.

Ghanaian actor, John Dumelo, has laced his boots to contest the parliamentary primaries of the National Democratic Congress (NDC) to enable him vie for the Ayawaso West Wuogon seat on the ticket of the party.

The cost of nominations forms and filing fees is GH¢1,000 and GH¢10,000 respectively, with a 50 per cent discount on the filing fees for women and persons with disability.

John Dumelo has for the past years been a strong supporter and member of the National Democratic Congress and has publicly shown this in his activities on campaign platforms and social media.