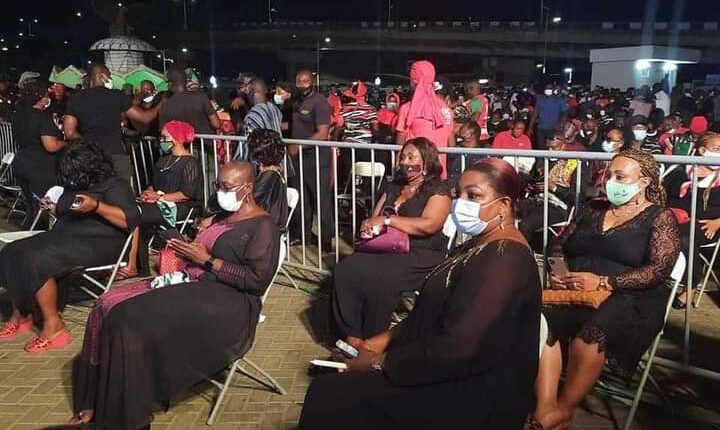 NDC’s Rawlings vigil: Who said what?

It was a night of eulogies and dirges for the man who founded the party and described by many as the founder of Ghana’s Fourth Republic.

The solemn event took place at the Obra Spot in Accra, three days after the man who led Ghana from December 31, 1981, to January 7, 2001, died at the Korle Bu Teaching Hospital in Accra.

The seven-hour programme saw hundreds of people gathered in the middle of the city. Most of those in attendance were clad in red and black, with others clothed in the NDC  colours. 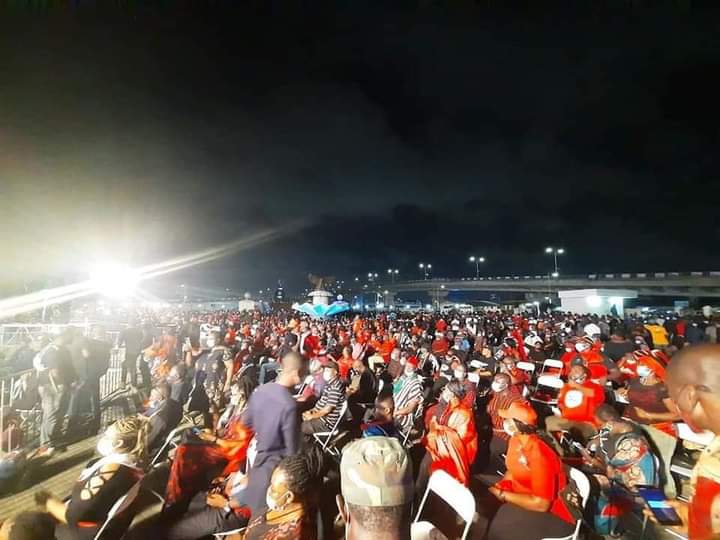 The party’s leaders took turns to speak at the event, while the Elikem Borbobor Troupe swayed the sympathisers to some soothing tunes.

Here, are the highlights of the event captured by theghanareport.com as various speakers took turns to speak.

In his tribute to his former boss, who gave him first political job as deputy minister of communications in the 1990s, Mr Mahama prayed the former president’s flame, values, ideals, leadership never depart from his disciples. 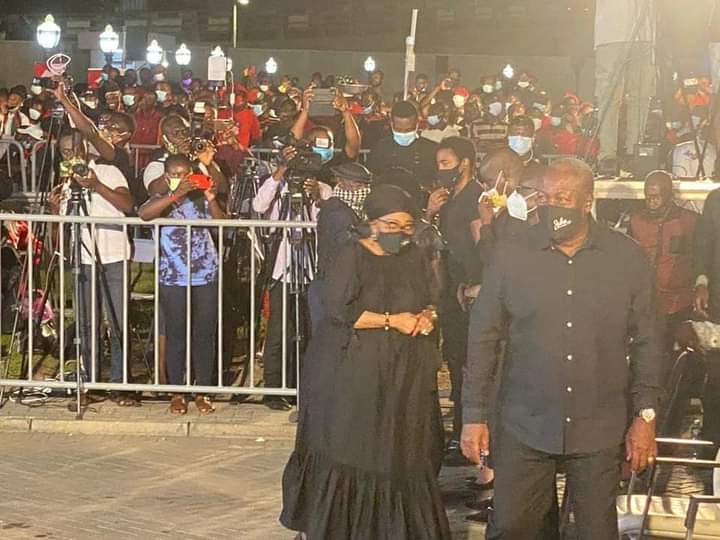 According to the NDC presidential candidate, the former president’s memory would continue to live on.

Commenting on the need to rename institutions after former presidents, Mr Mahama recounted that former president Rawlings response had always been to be remembered in thoughts.

“You can name it after the traditional leaders, chiefs and others, but I prefer to be remembered in the hearts of men than by monuments and statutes,” as were the words of the late Rawlings.

That, Mr Mahama, said was one of the humbling qualities he learnt from the former president. Indeed, “his death is not an end, but a beginning of greater things to come.”

The Chairman of the party, Samuel Ofosu Ampofo could only agree with the flagbearer on the values and ideals the former president brought to the party.

Mr Ofosu Ampofo also said although Mr Rawlings had departed, his principles — social justice, probity, accountability and transparency– would continue to live on.

In 1979, Mr Ofosu Ampofo recounted a time when he was en route to Nkawkaw, where he spent most of his Christmas holidays. According to him,  the community had one of the most deplorable roads back then and no electricity.

However, due to Rawlings’ rural development agenda, Nkawkaw benefited from the rural electrification programme and its roads became one of the safest and comfortable places in the country.

In remembrance of the former president, the General Secretary, Johnson Asiedu Nketia urged party members in the various constituencies to set aside a day to undertake road marches and clean up exercises in honour of the Founder.

He, however, added that the best way to honour the former president’s memory is to continue the rescue mission and free Ghanaians from the shackles of the governing New Patriotic Party (NPP).

The General Secretary argued that corruption and nepotism in the country were worse under the NPP leadership.  That, he insisted was not in line with the ideals of former President Rawlings.

A glowing tribute from the daughter of the late former president Rawlings, Dr Zanetor Agyeman-Rawlings and Kimanthi Rawlings was that they always knew their father was not only theirs but for the entire country. 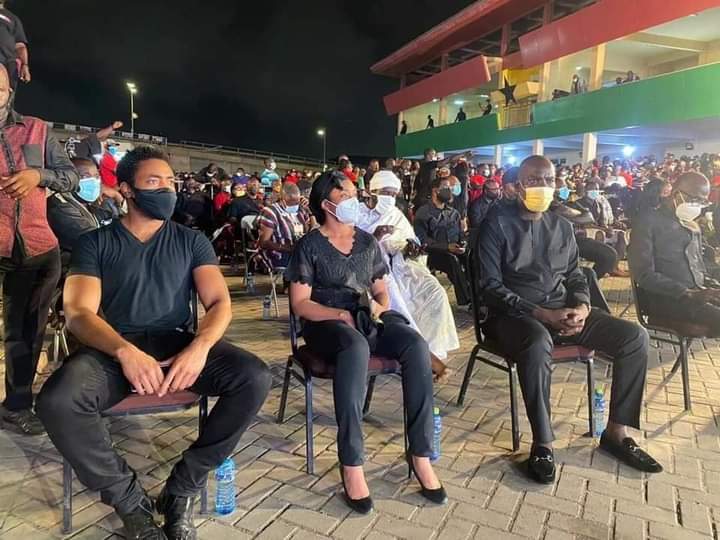 “We are here today, not just mourning our father but the father of many,” she ended her speech while quoting the famous Ecclesiastes 3, which spells out the seasons from birth to death.

The Klortey-Korle legislator said the best way to honour her father’s memory would always be to treat each other as one would love to be treated. 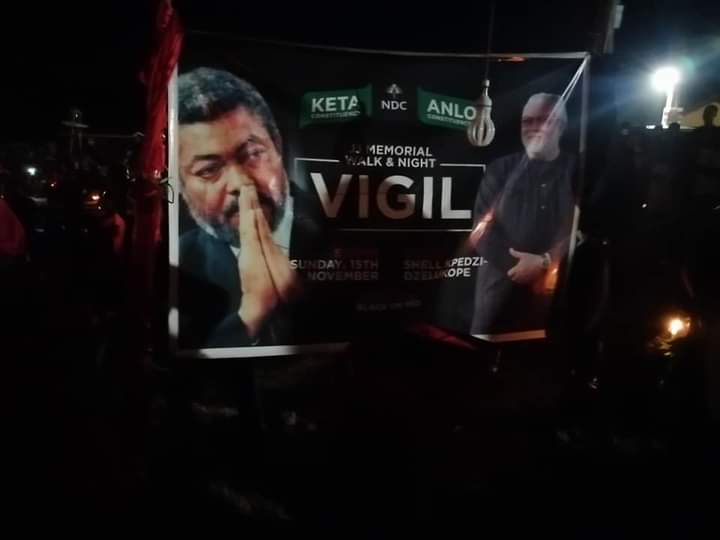 The Second Deputy Speaker of Parliament, Alban Kingsford Sumani Bagbin, said Rawlings was a gift to the country because he was what one would describe as a servant leader.

Other NDC faithful who shared their fondest memory of the former President off the stage said he was the most down-to-earth person, although he occupied Ghana’s highest officer for 19 years. 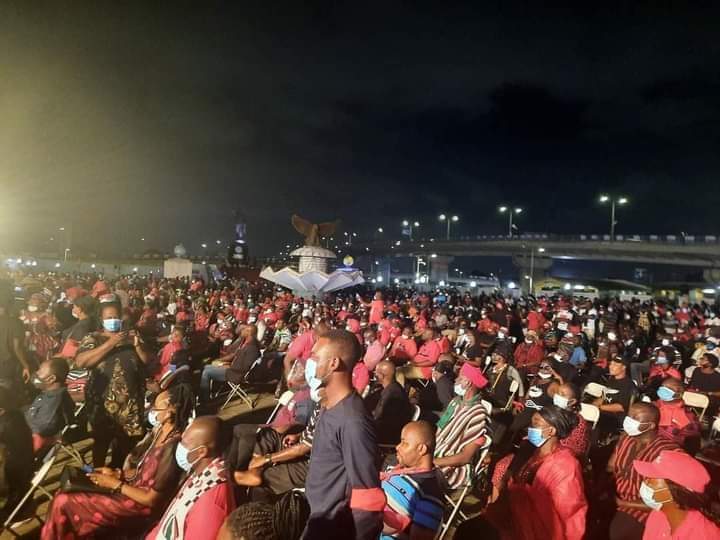 Also, present at the event was the party’s communication officer Sammy Gyamfi, Elvis Afriyie Ankrah, who was the MC for the night, National Youth Organiser George Opare Addo and some members of the Diplomatic Corp.

While speeches and the dirges flowed, others outside the event grounds were cashing in on the sale of candles, nose masks and NDC paraphernalia.

Other events have already been held to honour the departed president including a walk in the Ketu South constituency led by the NDC’s Parliamentary Candidate, Dzifa Gomashie.

Mr Rawlings died in the morning of Thursday, November 12, 2020, at the Korle Bu Teaching Hospital.

He passed on at the age of 73, leaving behind his wife, Nana Konadu Agyeman-Rawlings and four children.