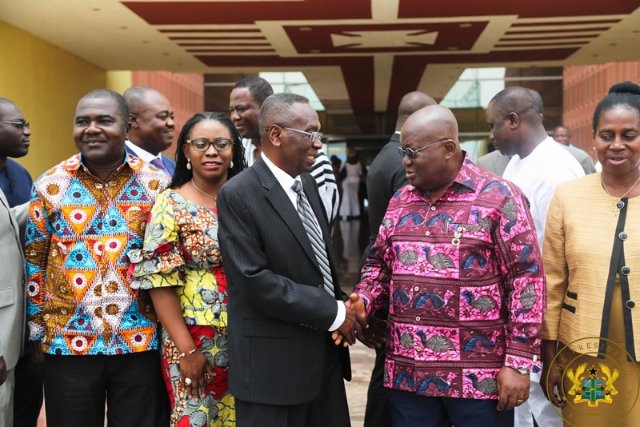 The government has published the Justice Brobbey Commission’s report on the creation of six new regions following recent agitations in some of the affected areas.

In the report, the Commission justifies its controversial recommendation that a referendum should be limited to the boundaries of the proposed new regions.

The 428-page report published by the Information Ministry also sets out the justification for the creation of the regions, stating that it found substantial demand for the six new regions.

Its decision was based on six major considerations: the spatial extent of existing regions; road infrastructure; access to government and public services; economic and employment issues; employment and participation; and ethnic cultural and religious issues.

On the controversial issue of places to vote, the Commission recommended that the referendum should be held only in the areas within the boundaries of the proposed regions.

The report, says this recommendation is consistent with Ghana’s past history of plebiscites and referendums particularly in 1949 and 1956.

The referendum is scheduled for December, 27.

The Commission also specifies that the question to be asked in the referendum should be: “Are you in favour of the creation of the new region? YES or NO”.

It also recommended that only registered voters within the proposed regions should be eligible to participate in the referendum.

President Addo Dankwa Akufo-Addo last week instructed the Ministry of Information to take steps to publish the report even though it is not mandatory per the 1992 Constitution.

The President explained that the publication would enhance good governance and transparency in the creation of the new regions.

The Minority in Parliament had urged the government to publish the report, arguing that would help clarify the commission’s recommendations regarding names for the proposed six regions and those entitled to vote in the referendum.

“There should be nothing secret about a report of this nature and we demand full disclosure in the public interest. It must be opened up to the entire nation to enable us to gain an insight into the thinking of the commission and the constitutionality of its recommendations and to determine whether the Constitutional Instrument laid in Parliament truly reflects the recommendations of the commission,” the Minority Leader, Mr Haruna Iddrisu, had said at a press conference in November 2018.

Also, on Wednesday, November 28, 2018, the Supreme Court rejected a suit challenging the constitutionality of the process initiated by President Akufo-Addo on receipt of petitions for the creation of the six new regions.

In a unanimous decision, a seven-member panel of the court upheld the Attorney General’s argument that Article 5 of the 1992 Constitution was “clear, precise and unambiguous’’ and, therefore, did not require any constitutional interpretation by the court.