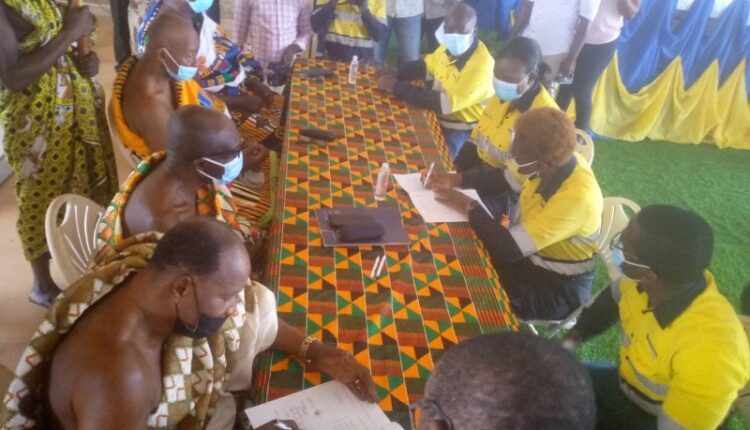 The Newmont Ahafo Mine in the Asutifi North District has signed a Revised Corporate Social Responsibility Agreement (CSRA) with communities within the mine’s operational area in the Ahafo Region.

The new agreement focuses on employment, foundation, and relationship, as the company finalises modalities to begin actual mining at its concessional area in the Ahafo North enclave.

Key members of the Ahafo Social Responsibility Forum, established by the Mine in 2006 signed the agreement at a short ceremony held at Ntotroso, a mining town, and witnessed by youth leaders drawn from Ntotroso, Kenyasi, Yamfo, Susuanso, as well as other mining communities and representatives of the company.

Others were Odeneho Kwabena Nsiah Ababio, the ‘Omanhene’ of Kenyasi Number Two Traditional Area, and Oberempong Antwi II, the Chief of Susuanso.

According to the agreement, the Company would increase its local employees from 35 per cent to 42 per cent of the total workforce by 2023 and rise to 53 per cent in the next agreement review.

The ceremony also witnessed the signing of another agreement between the Newmont Ahafo Development Foundation (NADeF) set up to facilitate sustainable development in the communities and the mining company.

Earlier, Mr. George Yaw Boakye, the Ahafo Regional Minister said the agreement was in the right direction, saying, it would facilitate economic growth and development in the mining communities.

Mr Ntrama, explained about 167 people in the area had so far benefited from the company’s apprenticeship training programme designed to provide employable skill training among the youth.

Mad Ayitevi, assured the Company’s commitment to operate within required international standards to enhance the development of the communities and better the socio-economic livelihoods of the people.

She said Newmont was working assiduously with other social investors to explore viable economic opportunities that would create employment for the locals, saying communities in the Ahafo Mine enclave would witness good road infrastructure and modern school buildings.

Mr Adams Abuu, the Ntrososo Youth Chairman later told the Ghana News Agency (GNA) that job expectations among the locals were still high and called on the Mine to create more and viable employment opportunities for the people.