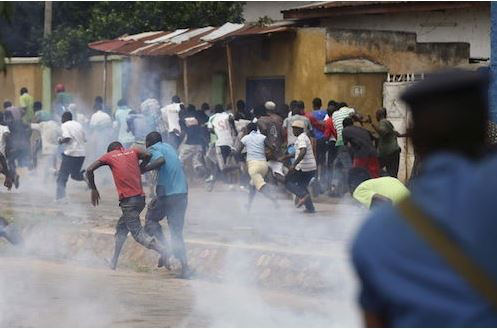 Sectarian violence sparked by a spat at a market has left 55 people dead in Nigeria’s northern Kaduna state, President Muhammadu Buhari has said.

Muslim and Christian youths reportedly clashed after a row between wheelbarrow porters in the town of Kasuwan Magani.

The state police commissioner said 22 people were arrested after the unrest.

Official presidential spokesperson Garba Shehu tweeted that Mr Buhari found the country’s frequent use of violence in such disputes “worrisome”.

According to the President, “No culture and religion support the disregard for the sanctity of life,” adding that “peaceful coexistence is necessary for the progress of any society and its wellbeing.”

Without harmony between different groups, “our everyday businesses would be impossible to achieve,” the president said.

He called on community leaders to encourage tolerance and stop such discord before it could develop into violence.