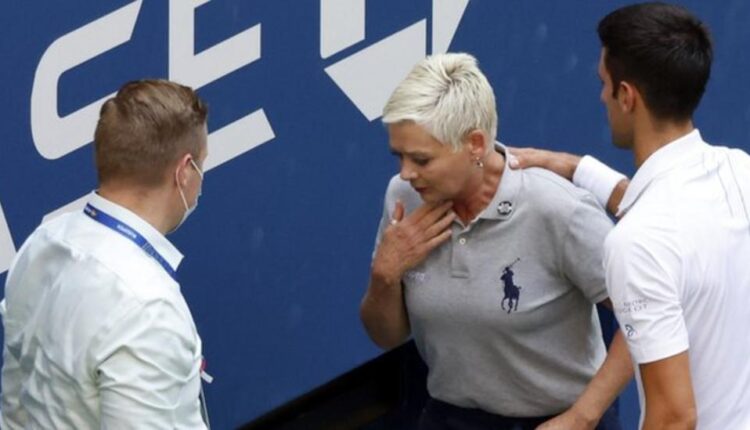 Top seed Novak Djokovic was disqualified from the US Open for accidentally hitting a ball at a line judge in his fourth-round match.

The Serbian world number one took a ball out of his pocket and hit it behind him, striking the female line judge in her throat.

After a lengthy discussion, he was defaulted by tournament officials.

A United States Tennis Association statement said: “In accordance with the Grand Slam rulebook, following his actions of intentionally hitting a ball dangerously or recklessly within the court or hitting a ball with negligent disregard of the consequences, the tournament referee defaulted Novak Djokovic from the 2020 US Open.

“Because he was defaulted, Djokovic will lose all ranking points earned at the US Open and will be fined the prize money won at the tournament in addition to any or all fines levied with respect to the offending incident.”

Djokovic was the heavy favourite to win the men’s singles title at the US Open, which is being played behind closed doors and is the first Grand Slam to take place since the beginning of the coronavirus pandemic.

Going into the encounter with 20th seed Carreno Busta, Djokovic had not lost a singles match in 2020.

He was aiming for an 18th Grand Slam triumph to move closer to rivals Rafael Nadal and Roger Federer, who are not playing in New York, in the race to finish with the most men’s major titles of all time.

Djokovic’s exit means there will be a new male Grand Slam champion for the first time since Marin Cilic won at Flushing Meadows in 2014.

A player outside of Djokovic, Federer and Nadal will win a major for the first time since Stan Wawrinka won the US Open in 2016.

Carreno Busta, who reached the US Open semi-finals in 2017, will play either Belgian seventh seed David Goffin or Canadian 12th seed Denis Shapovalov in the quarter-finals.