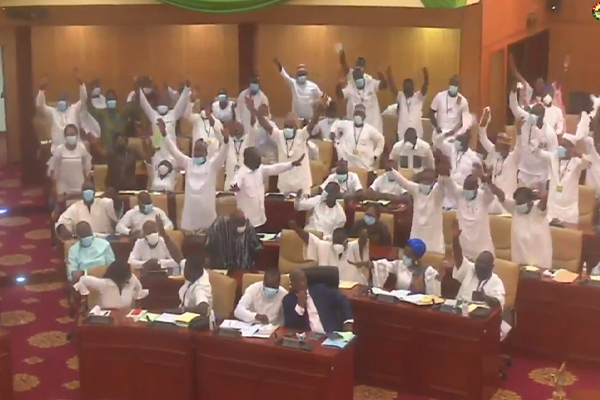 MPs from the ruling NPP government pulled out their handkerchiefs to celebrate their new but delayed status as a majority caucus.

They are sure Akufo-Addo won the presidency. But they were not too sure if they had won a parliamentary majority.

And this uncertainty may have been partly responsible for a sleepless Thursday night and a phenomenal Friday dawn punctuality.

They dragged themselves to parliament at 4 am, six hours ahead of work.  Reporting while NDC MPs were fine with snoring.

To psychologically confirm their majority, they took the right side of the chamber but something still did not feel right.

Until 1:40 pm Friday, when the Speaker announced indeed the NPP, were the majority caucus in a parliament where NDC and NPP hold 137 seats apiece.

The Speaker confirmed the only independent MP had pledged support for the NPP to make the ruling party the majority caucus.

In effect, in Ghana, we have a minor Majority and a major Minority. The NPP MPs sang a gospel song but NDC leader Haruna Iddrisu was happy to laugh.

The NPP MPs may now have a slightly better voice but Haruna is holding their balls and singing with your balls in the hands of your opponent makes a very crooked chorus.

Haruna Iddrisu knows this. The NPP MPs know this. Ghanaians know this.

He had a smirk on his face and in a triumphant jeer told Osei Kyei-Mensa-Bonsu, a five-star general of parliament that he has lost the war.

The majority caucus was decimated brutally at the polls. A 64-margin – vanished.

“The Hon Osei Kyei-Mensa-Bonsu in the 7th parliament had it easy because he had comfort of numbers. This time he does not” he said and paused to allow the grim implication to sink in as the lanky young NDC MP teased the battled humbled general.

“You will need us going forward,” he rubbed it in, explaining that where 2/3 majority is needed to make a decision in parliament, the NDC would be smiling to the bank – perhaps almost literally.

“That is why you must tolerate and respect us going forward,” Haruna Iddrisu repeated the NDC’s terms of engagement. 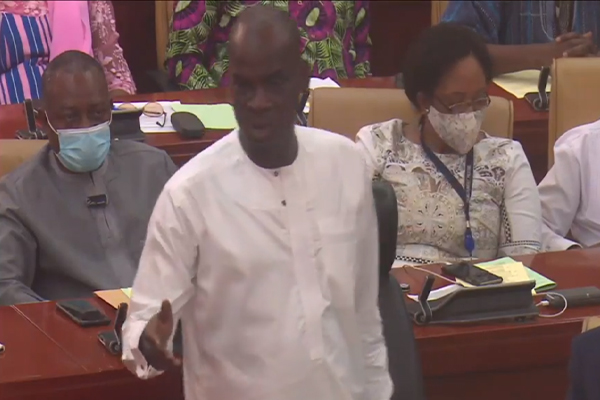 Osei Kyei-Mensa-Bonsu accepted the invitation of response and offered an oral cv of his consensus-building abilities to a skeptical-looking Minority.

The Suame MP explained his raw ability to jaw-jaw should leave no one in awe.

The NDC lost the 2020 presidential elections last December. But when the NDC MPs enter parliament each morning, they would feel they are in government.