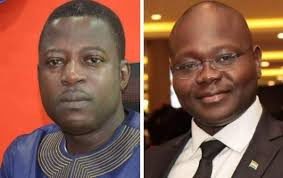 Supporters of the two New Patriotic Party parliamentary aspirants in the Bantama Constituency on Saturday clashed over the right of an alleged Bureau of National Investigations(BNI) officer to vote in the ongoing primaries.

It took police reinforcement to enforce law and order at a polling station, where supporters of the incumbent MP, Daniel Okyem Aboagye, challenged the delegate, insisting that a security personnel could not be delegated in an internal party affair.

During the melee, which nearly ended voting, dozens of armed police officers turned up at the polling station, to prevent chaos as Mr Aboagye goes head-to-head with a Deputy Chief of Staff, Francis Asenso Boakye, to seek the New Patriotic Party(NPP) ticket for the December 7 elections.

No one has been arrested.

Responding to the concerns on Joy News, the NPP’s Director of Elections, Evans Nimako, said security personnel were not qualified to vote in the party’s primaries.

He, was, however, quick to add that while he could not immediately verify the identity of the said delegate, as an official of the BNI, it was possible he was a delegate before entering the security services.

He urged the two aspirants to let cool heads prevail as there were processes and procedures to challenge delegates and it was not through the use of aggression.