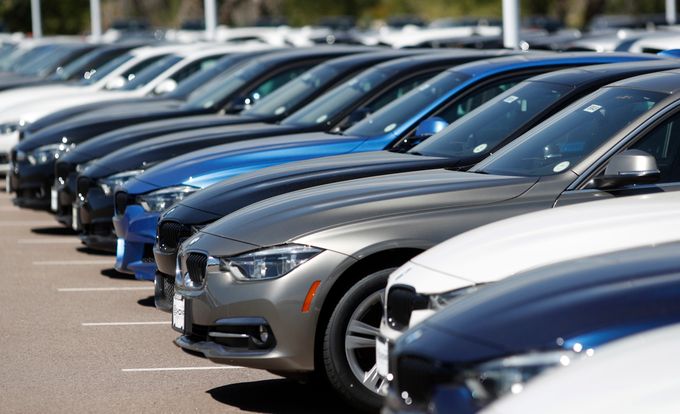 The Akufo-Addo administration is being pressurised by OccuyGhana to adhere to the rules and provisions in the law concerning the sale of some 361 government vehicles to political appointees between December 29, 2016, and January 6, 2017.

In a statement issued on Monday, the group demanded a return of all vehicles sold to appointees of the Mahama administration for proper valuation and due process to be done.

“The law that applied in 2016 is that which applies now. If the law was breached then with no consequences and sanctions, there is no guarantee that it would not be breached again. That is why these the ‘never again’ assurances provide cold comfort and ring hollow to us.”

I will put an immediate and permanent end to the purchase of duty post vehicles by political appointees,” and that “government vehicles will remain government vehicles.” Mr Mahama said at the launch of his party’s digital funding ahead of the 2020 elections.

President Nana Akufo-Addo on April 11, 2017, stated that no official in his government will have the opportunity to purchase a government vehicle

The group is, therefore, demanding the return of all vehicles or proof of proper documentation showing due process was followed and the right prices paid for them.

Below is the statement from the group:

OccupyGhana has read reports of a statement by former President John Mahama on 17 January 2020 that if he is elected back to office, he would “to put an immediate and permanent end to the purchase of duty post vehicles by political appointees,” and that “Government vehicles will remain government vehicles.”

On this matter, there appears to be unusual unanimity among the two leading contestants, as President Akufo-Addo is also reported to have told ministers on 11 April 2017 that “No official is any longer going to have the opportunity to buy any official car, so that we put an end to

While we at OccupyGhana® wholeheartedly agree with these pronouncements, we have grave reservations that must be addressed. Simply, we are not satisfied with bare promises and assurances of executive action. We believe that this is a matter where the government is simply required to respect and comply with the law as laid down in the 2003 Public Procurement Act, as amended in 2016.

Therefore, we demand proof that the government followed that law in the sale of a massive 361 government vehicles to “political appointees” between 29 December 2016 and 6 January 2017, or a return of all of those vehicles to the government for due process to be complied with and proper value realised for them. The law that applied in 2016 is that which applies now. If the law was breached then with no consequences and sanctions, there is no guarantee that it would not be breached again. That is why these the “never again” assurances provide cold comfort and ring hollow to us.

When the Public Procurement Act was passed in 2003, it introduced under its Part Eight (sections 83 and 84) a mandatory procedure for disposing of government “stores, plant and equipment.” That procedure involved establishing a Board of Survey, obtaining a Technical Report and Recommendations, and ultimately, the sale of only “obsolete or surplus items” by public tender to the highest tenderer or public auction subject to a reserve price.

While several citizens were in no doubt that this law applied to the sale of government vehicles, successive governments still disposed of such vehicles especially to their appointees after every election, without recourse to the law. The ridiculous and risible excuse from those governments was that the words “stores, plant and equipment” in the law did not specifically apply to vehicles.

However, with pressure from civil society and several others, in June 2016, Parliament finally amended section 83  and introduced a new section 83A to, the 2003 Public Procurement Act, so that the mandatory procedure for disposing of government assets would specifically apply to government vehicles.

Thereafter, one would have expected that the government would comply with this new law. However, in a period of just nine days starting from 29 December 2016 and ending on the night before the handover of power on 7 January 2017, and while Ghanaians were focused on the political transition, there was this massive sale of government vehicles to departing political appointees in apparent disregard and breach of the law, at an average of 40 cars per day!

On 28 March 2017, we wrote to both the Chief of Staff and the Administrator-General under our right to information under Article 21(1)(f) of the Constitution, inquiring whether the government followed the law in those disposals. It was within weeks of this letter and while we were awaiting responses that President Akufo-Addo announced the ban.

When after several months of more waiting we did not receive a response from either office, we sent reminders on 30 January 2018. This time we received a response from the Administrator-General on 7 February 2018 providing us with a schedule and details of 361 “vehicles disposed of as end-of-service benefits to political appointees,” the names of the beneficiaries, and how much they were sold for.

If the breach of the law was surprising, then the prices at which the vehicles were sold told a shocking story. For instance, a Toyota Camry registered in 2014 was sold to a political appointee in 2016 for GHS12,500. A Toyota Corolla commissioned in 2013 and registered in 2015 was sold to another political appointee for GHS6,000. Another Toyota Corolla, commissioned and registered in 2016 was sold for GHS6,100 to an appointee. A one-year-old Nissan Sunny went to an appointee for GHS7,500. In another instance, a Toyota Avensis was sold for just GHS1,200 to another appointee. BMWs were sold to the more prominent appointees at between GHS25,000 and GHS45,000.

In the absence of the Technical Report that the law demands, it is impossible to ascertain if these vehicles were even or duly classified as “obsolete and surplus.” What has become apparent is that there was no Board of Survey  or Technical Report. There certainly were no public tenders or public auctions. The vehicles were simply handed over to political appointees at ‘yor kɛ gari’ prices, all in flagrant breach of the law.

That is why in the Administrator-General’s February 7, 2018 letter, he tellingly stated that he could not provide information on whether the disposals complied with the mandatory procedure imposed by law, and then directed us to seek answers to this from the Office of the Chief of Staff. That office has never responded to us. When on 14 February 2018 we wrote back to the Administrator-General demanding data on disposal of assets since 2003, he responded on 15 February 2018 to say that his office did not have that data since it only came into existence in 2013.

Our further letter to the President dated 17 July 2018 demanding a full-scale inquiry into the matter has received neither a response nor any action. The lack of response is particularly worrying when viewed against the fact that section 92 of the Act criminalises breaches of its provisions and makes offenders (i.e. officials and beneficiaries) liable to be jailed for up to five years.

It is in the light of the above that we remain unconvinced by the assurances made by the immediate past president and the current president to end this practice. We note that they still fail to acknowledge the sheer illegality of it. That is why we believe that the best way to assure Ghanaians that this practice is or will be a thing of the past, would be to satisfy Ghanaians that the December 2016 sale of 361 government vehicles was in accordance with the law. If not, we expect the government to rescind those sales forthwith and then compel compliance with the law.

We call on all well-meaning Ghanaians to support our demands especially in the light of our shared constitutional duty under Article 41(f) “to protect and preserve public property and expose and combat misuse and waste of public funds and property.”

We believe that in the coming elections, Ghanaians will judge the parties, especially those that are in power or have been in power before, not just by the sweetness of their promises and assurances, but by their deeds concerning the same matters about which they seek to make promises and give assurances.

Still in the service of God and Country.