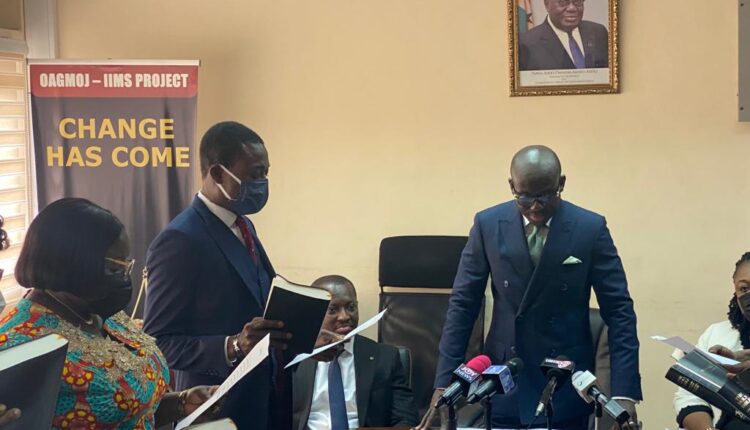 Office of the Special Prosecutor new board unveiled

Attorney-General Godfred Yeboah Dame has sworn in the new Office of the Special Prosecutor (OSP) board, tasked with fighting corruption-related activities.

The board, which is expected to elect its chairperson at its first meeting, is made up of the Special Prosecutor, Kissi Agyebeng; the Deputy Special Prosecutor, Cynthia Jane N. Lamptey and a representative of the Audit Service, Lawrence Ndaago Ayagiba.

Aside from the main objective of formulating policies necessary for the achievement of the objective of the OSP, the board is required to ensure the proper and effective performance of the functions of the Office.

They are also expected to advise the Special Prosecutor on the recruitment and selection of senior staff and facilitate cooperation between the Office and relevant national investigative bodies.

The members will hold office for three years.

At the swearing-in ceremony in Accra, the Attorney General urged the newly sworn-in board to comply with the rules bordering on asset declaration and disclosure of interest obligation to help strengthen the operations of the OSP.

“I affirm my trust in the newly sworn-in board and pledge my fullest support for its statutory obligations. The nation rests its hopes on you to ably spearhead an efficient process for the provision of a strong anti-corruption agency.

“Faithful adherence to these simple duties holds far-reaching implications for your record in public life,” he said.

In his remarks on behalf of the board, Mr Agyebeng welcomed the new board and urged the members to bring their experiences to bear to help realise the objectives of the board.

He further assured the A-G of his outfit’s quest to put in its full professional best to ensure that the OSP became the foremost anti-corruption agency on the continent.

It will be recalled that Kissi Agyebeng was nominated by Attorney-General for the role of Special Prosecutor and was subsequently vetted by the Appointments Committee of Parliament on July 22.

At the vetting, he maintained that he could not end corruption in Ghana. However, he would work to reduce corruption to the barest minimum.

“I am not naive to assume that I am coming to stop corruption. There is no way I can stop corruption, God himself would not even acclaim to that, but I am going to make corruption very costly to engage in.

To fight corruption, he said he would institute what he termed ‘Pressure for Progress’, which would involve a systemic review of public sector institutions and the development of integrity plans.

He proposed a Ghana version of the global Corruption Perception Index benchmark to address the canker in public institutions.

“In that quest, if you are the head of an institution and persistently your institution is drawing the short straw in terms of perception of corruption from the point of view of experts, or business people, you will sit up,” he suggested.