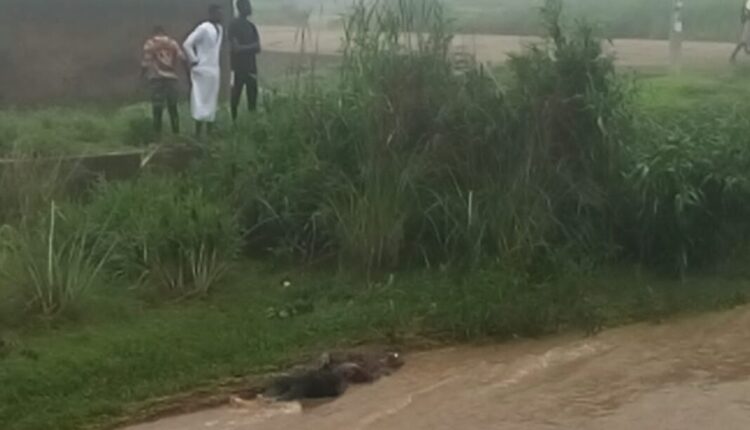 An unidentified man’s body was found on Monday morning after the Eastern Regional capital flooded on Sunday, October 2, 2022.

He was found in a drainage at Sentimental, near the Oti Boateng Senior High school, a suburb of Kofoidua, after the flood waters receded.

A downpour on Sunday flooded the major roads leading to Koforidua.

This blocked vehicular movement and caused hours of gridlock leaving several drivers and passengers stranded until flood waters subsided later in the night.

The drivers who attempted to drive through the flood waters had their engines damaged.

A newly constructed bridge on Koforidua to Nyamekrom road which was serving as an alternate route to Suhum also collapsed.

As a result of this, some commercial drivers charged their passengers who were headed out of Koforidua double the normal transportation fares.

A statement by the Ghana Highway Authority- Eastern Region alerted that, “all motorists travelling between the DVLA roundabout in Effiduase- Koforidua to Suhum that due to the heavy downpour of rain over the weekend the road is temporarily not passable at the bridge at Akwadum.”

Fuel stations and some mechanic shops also got flooded damaging parked vehicles in the process.

The flood which was caused by the overflow of the Burim, Ayensu, and Densu Rivers after three days of torrential rains also affected other parts of the Eastern Region.

Many homes near the Birim river were seriously flooded for the first time in many decades.