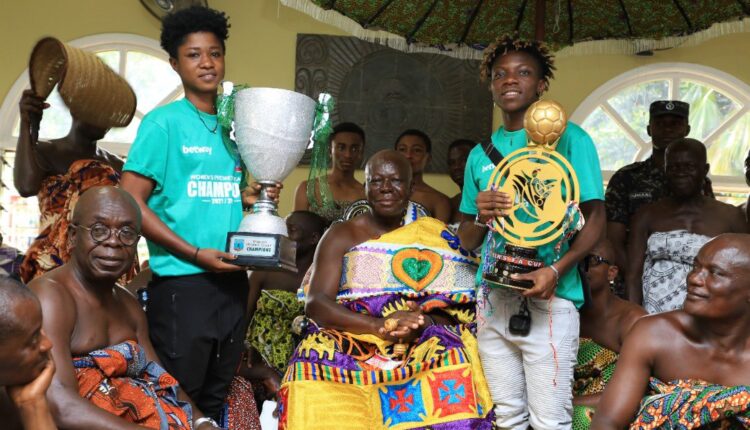 The Asantehene of Asanteman, His Royal Majesty Otumfuo Osei Tutu II has decided to support Ampem Darkoa Ladies with a sum of GHS50,000.

The amount is to help the Ghana Women’s Premier League champions in their campaign in the upcoming CAF Champions League.

His Royal Majesty Otumfuo Osei Tutu II pledged to give the club the amount on Wednesday when the team visited him at Manhyia in Kumasi.

During the visit, Otumfuo applauded the teams’ effort of annexing the double after Ampem Darkoa Ladies presented both Ghana Women’s Premier League and FA Cup titles to him.

”Present with us were the President and Owner, Nana Opoku Fosu Gyeabour II, some Management members and Technical Team.

“His Majesty supported our Africa campaign with Ghc 50,000. Long Live His Majesty,” A post on the Twitter page of Ampem Darkoa Ladies has said this evening.

Having conquered the Women’s league in the country, the club will have the chance to participate in the second edition of the CAF Women’s Champions League.