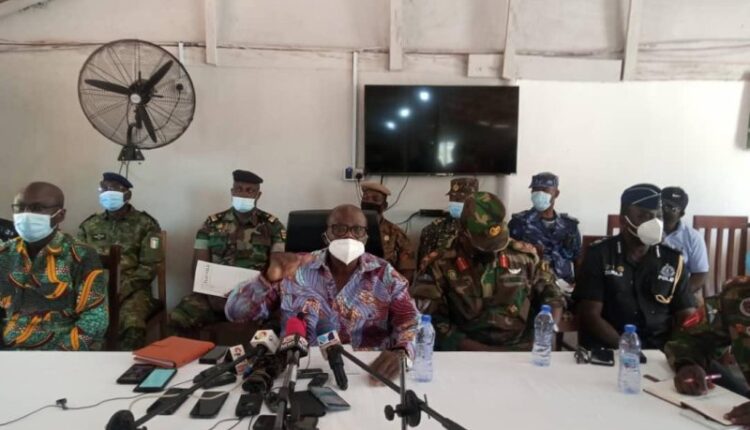 A total of 386 suspected criminals have so far been arrested for various security infractions in the ongoing joint military operations in the Upper West, Upper East, Northern, North-East, and the Savannah Regions.

The number comprised 279 Ghanaians and 107 foreign nationals-Burkinabe’s, Malians, Togolese, Nigerians, and Nigeriens and were arrested for various infractions and are all being strictly screened.

Brigadier General Emmanuel Okyere, the National Security Advisor, who disclosed this in a media briefing in Wa, said the multinational joint operation dubbed: “Operation Koudolgou” was the fourth in the series since the Accra Initiative in 2017.

He noted that the main objective of the operation was to fight terrorism and transnational organized crimes within their common border to free it from both illegal and criminal activities within defined areas of operation.

Brigadier General Okyere said the operation took place in all five regions of Northern Ghana and in the same areas of neighbouring Cote D’Ivoire, Burkina Faso, and Togo.

He noted that due to the operation, there had been increased presence of security forces in the Northern enclave, adding that these security activities were part of the planned programmes of the Accra initiative, which encompasses Benin, Burkina Faso, Cote D’Ivoire, Ghana, Mali, Niger and Togo.

“We are all aware of the terrorists’ activities in the sun regions and as the adage goes, ‘when you see that there is a fire in your neighbour’s house, you don’t wait for the fire to engulf you, but you fetch water and put it down in case the fire gets to you, you use it to quench the fire”, he said.

The National Security Advisor said they were not waiting for any fire to get to them, but rather, they were doing whatever possible to prevent that fire from getting to them.

“So, all we are doing year-in-year-out for this particular region is to prevent any terrorist attack on our land and this is a shared responsibility,” Brigadier General Okyere said.

He said they were providing a number of boreholes to about seven communities in the operational area as a social responsibility, noting that, ridding the country off criminal elements had been their aim in the exercise and it had been largely achieved.

Brigadier General Okyere clarified that the operation was not targeted at any group of people but rather targeted at a network of criminals, adding that all their operations have been professional and intelligence led.

The National Security Advisor said they were achieving some security in the border areas due to the collaboration with the neighboring security counterparts to carry out cross-border arrests.

“The crime rate in this part of the country has gone down considerably”, the National Security Advisor said.

Lieutenant Colonel Gyima, the Commanding Officer of the 10 Mechanized Battalion in Wa, Mr Suraj Mohammed, the Director of Operations for Ghana Police Service, Brigadier General Moses Aryee, General Officer Commanding the Northern Command and other security Representatives from Burkina, Togo, and Cote D’Ivoire were in the company of the National Security Advisor.