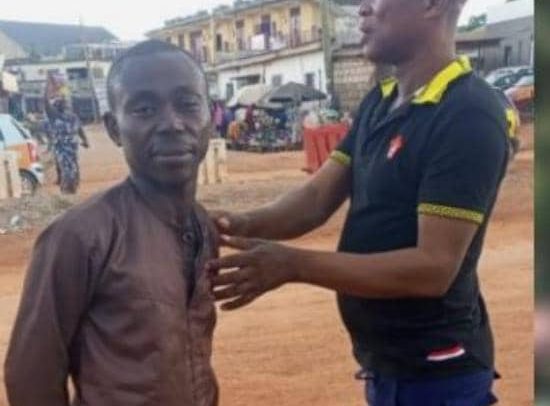 The incident reportedly occurred at Assin Bereku in the Assin North District of the Central Region over the weekend.

The suspect, Yaw Owusu aka Akwankyerɛ is the founder and leader of the Truth Redemption Church at Assin Bereku.

According to reports, the deceased got missing in the bush after she went to the farm with her ex-husband on September 29, 2022.

The report said the two divorcees used to call each other even though they have divorced and stayed separately.

The pastor gathered and used that opportunity to invite his ex-wife to escort him to the farm that fateful day.

The suspect returned home without his ex-wife and failed to inform anybody about the whereabouts of the woman.

However, the family of the deceased and elders of Assin Bereku suspected the man of the ex-wife’s disappearance after giving contradictory statements upon interrogation.

The Elders then caused his arrest and handed the suspect to the Assin Bereku Police to escape the wrath of the angry youth and went to the farm to pour libation.

When the police searched the pastor’s room, they found over 30 female panties which according to reports belong to the women she baths as part of his spiritual direction.

Meanwhile, about 500 angry youth from the town besieged the Assin Bereku Police station demanding the release of the suspect, Yaw Owusu to be lynched.

To mitigate the pressure from the youth, the suspect has been transferred from Assin Bereku to Assin Fosu Divisional Police Command.

The body of the deceased has been deposited at the St. Francis Xavier Hospital’s mortuary whilst the police are conducting investigations.