A pathologist at the Korle-Bu Teaching Hospital who conducted a post-moterm on the late Major Maxwell Adams Mahama has revealed that the late Military man died out of “multiple head injuries.”

Dr Lawrence Edusei, who is the 13th Prosecution witness in the trial in which some 14 persons are standing trial for murder, told the Criminal Division of the Accra High Court that the ex-soldier died an unnatural death.

Major Mahama was lynched by some residents in Denkyira Obuase in the Central region on suspicion he was an armed robber.

The gruesome killing of the soldier sent anger and shock among a wide section of the Ghanaian public.

Many demanded the arrest and prosecution of persons found guilty of the crime.

But two years down the line, a court process moving with the pace of a tortoise meant that not a single individual has been  found guilty over the incident.

The witness, Dr Edusei who was led by a Chief State Attorney told the court today November 19, that “the cause of death is multiple head injuries due to blunt objects and shotguns which are unnatural cause of death.”

Dr Edusei, also a visiting pathologist at the 37 Military Hospital, further explained that the blunt objects are objects that do not have sharp edges like stone, wood and iron rods.

He also revealed to the court presided over by Justice Mariama Owusu, (one of the three Judges appointed by the President waiting for confirmation to the Supreme Court) that two pellets were also retrieved in the brain of the late military man.

On the dawn of Monday May, 29,2017, an officer with the 5th Infantry Battallion of the Ghana Army, then known as Maxwell Adam Mahama, was lynched at Denkyira-Obuasi in the Central Region.

At dawn of that day, Capt. Mahama went on his usual jogging.

On the way, it is reported that he came across two women, who assumed he was an armed robber because he had a gun tucked at the back of his trousers.

Multiple sources said the women called the Assemblyman and informed him that they had seen a man with a gun and were convinced that he was an armed robber.
The Assemblyman then called two associates and headed to the area where the Captain was seen jogging.
According to him, upon reaching the venue, the soldier opened fire on them.

He ran away leaving the two.

He proceeded to the police station to report the incident, but by the time the police arrived at the scene, the Captain had been lynched. 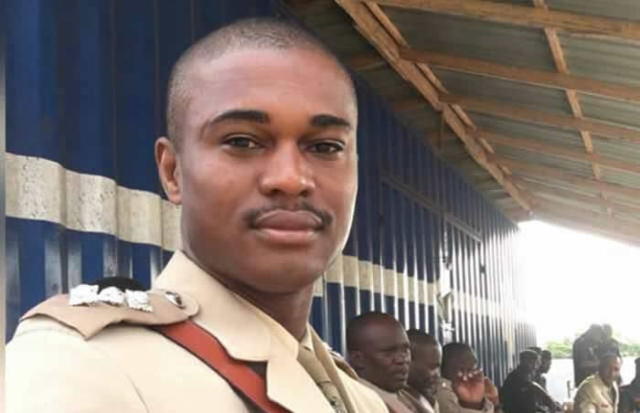 The ex-soldier had his head smashed with bricks and other objects.

A day after his death, armed military officers were dispatched to the area.

This sent residents fleeing from the town for fear of being attacked also by the armed personnel.

About 120 residents were picked up for their involvement in the incident.