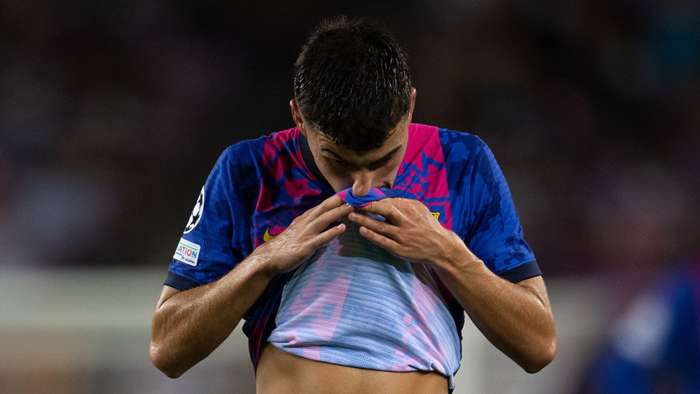 Pedri and Jordi Alba have added to Barcelona’s injury crisis after their Champions League defeat to Bayern Munich on Tuesday night.

Barca suffered a 3-0 defeat to Bayern at Camp Nou in their Group E opener, with Thomas Muller scoring first before Robert Lewandowski bagged a second-half brace to hand Julian Nagelsmann’s side all three points.

Ansu Fati, Sergino Dest, Sergio Aguero, Martin Braithwaite and Ousmane Dembele were all unavailable for the heavyweight European fixture due to respective injuries, and Ronald Koeman could now be without two more star players when his side resume their La Liga campaign next week.

Barca have released a statement confirming that Pedri picked up a thigh complaint after playing the full 90 minutes against Bayern.

“The first-team player Pedri has a quadriceps muscle injury in his left thigh,” the press release reads. “The player is unavailable for selection and his recovery will dictate his return.”

Alba, meanwhile, sustained a knock during the game which saw him substituted for Balde Martinez in the 74th minute, with Barca’s statement adding on the full-back: “Tests carried out on Wednesday morning on the first-team player Jordi Alba show that he has a hamstring injury in his right thigh.

“The player is unavailable for selection and his recovery will dictate his return.”

How many games could Pedri & Alba miss?

Pedri and Alba are now both major doubts for Barca’s next La Liga fixture against Granada on Monday, with there currently a three-point gap between themselves and leaders Real Madrid – who have played a game more.

Koeman’s side will only have a three-day turnaround before facing Cadiz, and are then set to wrap up their September schedule with a clash against Levante and a second Group E encounter with Benfica in the Champions League.

Koeman expressed his frustration over the reduced numbers in his squad after the loss to Bayern, while also admitting that Barca are some way behind the German giants in their overall development as a team.

“There were only three strikers available,” he said post-match. “Tactically there were moments in which we were in control. Bayern’s game is in the middle third and you have to fill [the gaps] there. It is what it is for the time being. I cannot complain about the attitude, but there is a difference in quality.

“They are a team that as a group have been together for a long time and also have a bench that has improved.”