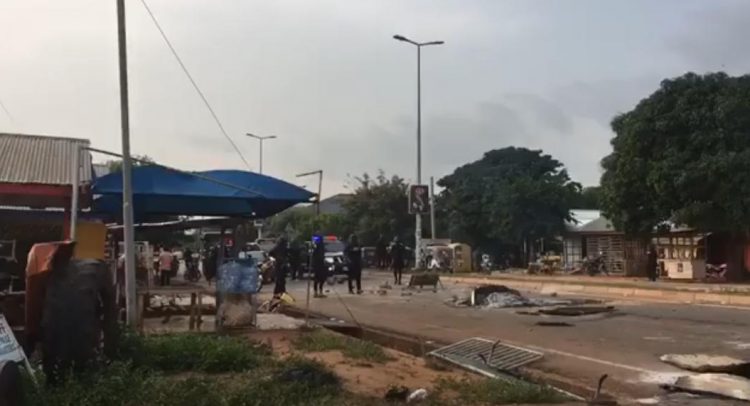 The Ghana Police Service is appealing to the Youth of Nkoranza in the Bono East Region to remain calm and allow the Police to investigate the circumstances which led to the death of a robbery suspect, Albert Donkor.

This appeal follows a clash between the Youth of Nkoranza who went on a rampage and attacked the Municipal Police Headquarters demanding justice for the death of the suspect.

The Police in a statement said ”as part of a holistic strategy to tackle the menace of armed robbery, the Police Administration has since August 2021 deployed special anti-robbery task forces to all robbery prone areas across the country.

“These special anti-robbery task forces have conducted a series of intelligence-led operations which have contributed immensely to the reduction of armed robbery incidents in the affected areas”.

The Statement further stated that in the Bono East Region, Police gathered intelligence that a suspect, Albert Donkor, and a gang of five other suspected armed robbers, whose names are being withheld for investigation purposes, were involved in several armed robbery attacks in the region, including armed robbery attacks at Nkoranza on April 19 and 20, 2022.

According to Police, based on this intelligence, an operation was conducted during which the suspect, Albert Donkor was shot.

He was rushed to the Holy Family Hospital for medical attention, but he was pronounced dead on arrival.

Following the death of suspect Albert Donkor, the Bono East Regional Police Command held engagements with the family of the deceased and other relevant stakeholders in response to their concerns regarding the incident, Police indicated.

However, per the concerns raised by the youth and the family, the ”Police Professional Standards Bureau (PPSB) has commenced an investigation into the incident to ascertain whether the operation was carried out in line with the standard operating procedures”.

In addition, ”the Inspector-General of Police, Dr. George Akuffo Dampare spoke with the family on the telephone and has constituted a high-powered delegation led by COP Christian Tetteh Yohuno, the Director-General/Administration to visit Nkoranza on Wednesday, May 18, 2022, for further engagements with all the stakeholders.”