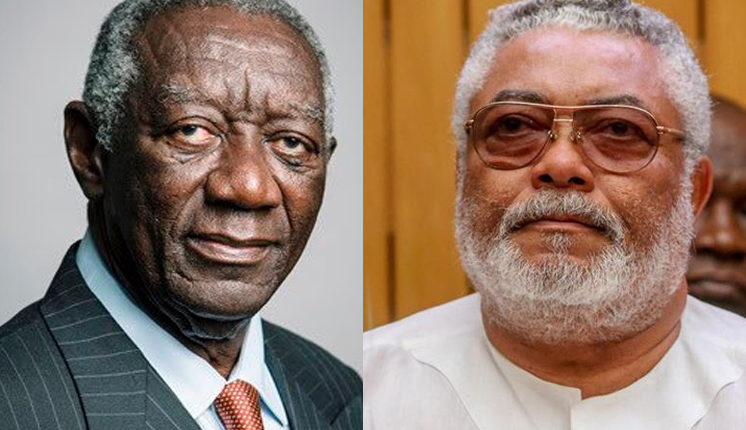 Rawlings and Kufour throw jabs at each other

The rift between former President Jerry John Rawlings and his successor, John Agyekum Kufuor seem to always have an interesting way of reigniting after several years of dormancy.

The two former presidents are believed to be at loggerheads with each other,  thereby causing Ghanaians to wonder what really transpired between them.

Well, this year, the simmering tension between the two former presidents erupted after Mr Rawlings, while addressing the GJA on October 31 2019, alleged that his successor was responsible for the perennial floods which has become a menace in the capital city, Accra.

The former president is quoted to have said amongst other things, “Nkrumah has left his legacy, the freedom and Justice arch… I am saying that’s something he left. Do you want to know the one for Kufuor? Those Villagio villages”, Rawlings said with passion.

These utterances did not obviously settle well with Mr. Kufuor who through his spokesperson Dr Kwabena Osei Adubofour poked back at Mr Rawlings saying, “…When Acheampong gave a bungalow to Nkrumah’s family, it was Rawlings who took the bungalow and gave it to D.F. Annan…When Fathia wanted to be buried beside her husband, we all know what Rawlings said about that…Someone built his hotel and later buys it. So Kufuor’s son bought African Regent, what is wrong with that?… What is he trying to achieve? We are talking about floods and you bring in Kufuor… You pick a grudge against Kufuor because he replaced you… You couldn’t have been president forever.”

This, however, should have settled the score between the two for this year but Mr Rawlings, unimpressed about Mr Kufuor’s reply has once again registered his displeasure on November 4, 2019.

In his reprisal letter sited by The Ghana Report, he explained that his incessant attacks targeted at Kufuor are borne out of his prior knowledge of the genesis of Ghana’s economic woes.

He said, though he has been advised to let sleeping dogs lie, he cannot keep calm knowing the cause of Ghana’s ‘failures’ continues to absolve himself from blames.

Part of his Mr. Rawlings’ statement read “…I cannot be silent knowing where, when and how the rot started all over again in this country…If I were to call you a hypocrite and other adjectives related to your character defects, I would be stating a fact about your nature…”

Mr. Rawlings ended by emphatically stating that, if he shared similar traits with his successor, they would have been allies.

“For your information, being civil is one thing. Being hypocritical is something else. If I had such character traits, we probably would have been allies!”

This reprisal may, however, be the end of another chapter from the two ‘rivals’ for this year. It may also, on the other hand, be the beginning of a clash of the Gentle Giant and Mr. Boom.