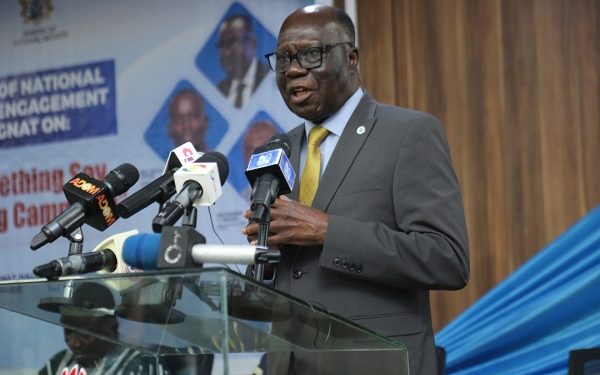 President Nana Addo Dankwa Akufo-Addo has enhanced Ghana’s National Security set-up with the appointment of Amb. Maj. Gen. (Rtd) Francis Adu-Amanfoh as the Special Advisor to the President for the Accra Initiative to fight terrorism threats in the sub-region.

Prior to the latest shake-up, Amb. Maj. Gen. (Rtd) Francis Adu-Amanfoh was serving as the National Security Co-ordinator.

Growing terrorism threats have necessitated an advanced approach, and the retired Army commander has been identified to use his rich experience and intellect to deal with the canker.

He will be working from the Office of the President, a release by Communications Director at the Presidency, Eugen Arhin, said on Friday, 5 August 2022.

The Accra Initiative was launched in September 2017 by Ghana, Togo, Benin, Burkina Faso and Côte d’Ivoire as a vehicle for enhanced security co-operation amongst the countries in response to the growing threats of terrorism and violent extremism in West Africa.

The confirmation of his appointment is subject to the receipt of the constitutionally required advice of the National Security Council, given in consultation with the Public Services Commission.

In a related development, President Akufo-Addo has appointed Mr. Kwaku Domfeh, Director General of the National Intelligence Bureau (NIB), as Ambassador-designate to the Democratic Republic of Congo.

“Further to Section 15 (1) of the Security and Intelligence Agencies Act, 2020 (Act 1030), the President has appointed Nana Attobrah Quaicoe, currently Deputy Director-General of NIB, to act, with effect from Monday, 8 August 2022, as Director-General of the National Intelligence Bureau, with his confirmation also being subject to the receipt of the constitutionally required advice of the National Security Council, given in consultation with the Public Services Commission,” the release added.

He was appointed National Security Coordinator in 2021.

He is affectionately known as ‘General’, and he served in diverse command and staff leadership positions in the Ghana Armed Forces (GAF) for 37 years before retirement.

In the last six years of his outstanding military career, he was Chief of Defense Intelligence of the Armed Forces of the Republic of Ghana.

The General served as Ghana’s Ambassador Extraordinary and Plenipotentiary to the Republic of Liberia from 2006-2009 under the presidency of John Agyekum Kufuor.

Prior to that appointment, he was the resident Ambassador of Ghana to the Republic of Mali, with concurrent accreditation to the Islamic Republic of Mauritania.

In May 2005, he was appointed Head of Defence Intelligence in the Ghana Armed Forces and was posted as Ambassador to Liberia on 27 January 2006.

With his new position, Francis Adu-Amanfoh is expected to work closely with the Minister of National Security, Albert Kan Dapaah, Minister of Defence, Dominic Nitiwul and the Minister for the Interior, Ambrose Dery, to tackle security threats.