The president of the Republic of Ghana, H.E Nana Addo Dankwa Akufo-Addo will lead a retinue of dignitaries to cut the 30th Anniversary cake of Winneba Youth Choir at the National Theatre on November 23rd.

Nana Akufo-Addo is the Chief Patron of the choir and will be supported by Former Presidents who have once been and are still Patrons of the Choir.

The event which is being put together by Think Media Expert, an event organizing and Media Company will take place at the National Theatre on Saturday, November 23, 2019, 6:00 pm sharp. Tickets are going for a cool 50.00. You can get tickets at the front desk of Joy FM, National Theatre and Nice FM, Winneba. 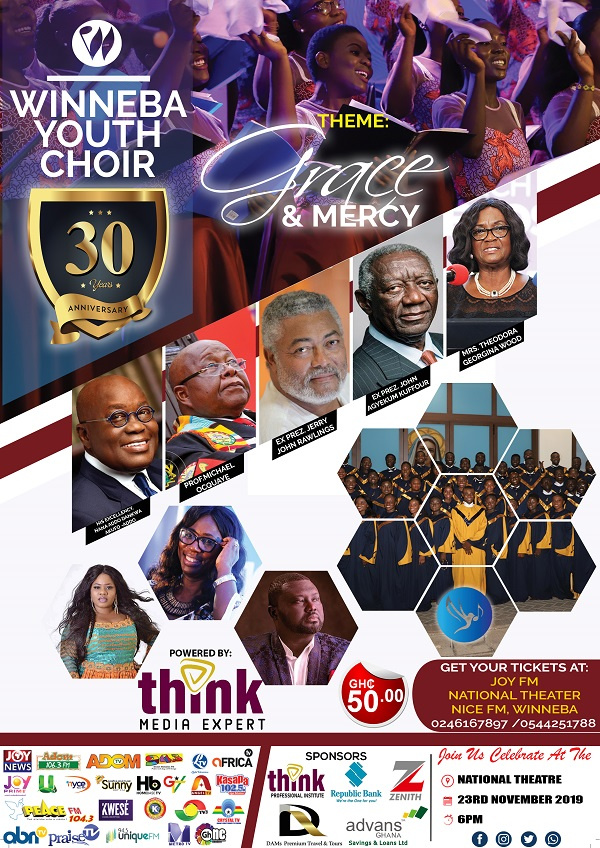 The occasion will also witness the crème-de-la-crème of society as well as Patrons from all walks of life including foreign dignitaries and diplomats. Renowned singers such as Cindy Thompson, KODA and Obaapa Christy and Chorale group, Heavenly Jewels will perform at the event.

In May 1989, a young talented musician George Mensah-Essilfie, who was then the principal organist of the Winneba Ebenezer Methodist Choir, came up with the brilliant idea of training the children who accompanied their parents to choir practice in a junior choir.

John Francis Arthur-Yamoah, who at the budding age of 14 was already an assistant conductor of the church choir, assisted him.

In March 1998 the choir was incorporated and registered as a non-profit making association, with the objective of providing a platform for the education and development of the youth in Winneba and surrounding towns through the medium of singing. It is inter-denominational.

The Winneba Youth Choir boasts of being the only choir that has performed for three visiting American Presidents – President Bill Clinton, President George Bush, and President Barack Obama. Also, they were around to welcome Former German President H.E Horst and Mrs. Eva Luisa Kohler as well as the Prince of Orange of the Netherlands and his wife.

The Choir has toured almost all continents in the world and apart from giving people the real African repertoire of music, done some collaboration across the continents as well.

With 30 years of existence, the Choir has contributed positively to the development of over 1,000 youths in its catchments area.

Will you go to the gym when it reopens?