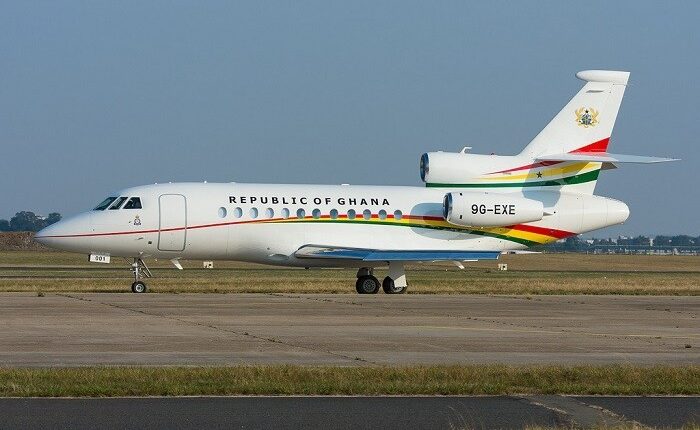 Ghana’s presidential jet, the Falcon, is not ideal for long journeys, an aviation expert based in the United States, Mr. Sean Mendis, has stated.

According to him, such journeys can only be pursued with the Falcon with higher technical support and less luggage and passengers onboard.

Mr. Mendis said these when asked whether the Falcon is suitable for long hour trips, which his answer was emphatically “No”.

“Optimally it can probably do around 3000 miles which is about six hours. It is capable of flying further with fewer luggages, with less people on board.”

He made this pronouncement while speaking in an interview with TV3 on Monday, 27 June 2022.

The interview was based on the criticisms against President Nana Addo Dankwa Akufo-Addo by North Tongu Member of Parliament (MP) Samuel Okudzeto Ablakwa for what he believes is the president’s seeming extravagance with regard to the flights chartered for his trips abroad.

On his Facebook page, the MP said the president’s recent trip to Belgium and Rwanda had cost the taxpayer €480,000.00, equivalent to GHS4.1 million.

“For President Akufo-Addo’s current trip to Belgium and Rwanda; we can confirm a conservative bill of €480,000.00. The 480,000 Euros which is derived from 21 hours of total flight time plus other industry charges works out to some 4.1million Ghana Cedis at current exchange rate,” he alleged.

The Ranking Member on the Foreign Affairs Committee of Parliament also alleged that President Akufo-Addo travelled out of Ghana aboard a monster luxurious Airbus ACJ319 private jet.

However, the Director of Communications at the Presidency, Mr. Eugene Arhin, in response to the MP, said he was hoping that Mr Okudzeto Ablakwa would back up his claim that President Akufo-Addo travelled to Brussels aboard a chartered plane but he has failed to do so.

Mr Arhin further dismissed the claim, describing it as false.

“Again, after being caught out on the Accra-Brussels-Kigali lie, the Honourable Member of Parliament tries to justify the so-called “21-hour” cost of the flight with some voodoo charges. What is shocking, in his Friday statement, is the admission of the fact that he does not know for a fact the cost of the charter.

“The so-called €480,000 cost he is bandying about is the result of guess work, and on the reliance of a ‘generous 21-hour cost analysis’. He provides no evidence or documentary proof whatsoever to back up his €480,000 cost claim, because he has none. Once again, it is obvious that the Honourable Ablakwa finds these attacks on the President to be his pathway to political prominence through negative propaganda, and is determined to pursue this course, no matter how ridiculous and insulting his statements are.

“He further states that, if Brussels Airport was closed due to the strike, President Akufo-Addo could have arrived in Kigali “through the many (other) busy transit routes”, for example Paris. For Hon. Samuel Okudzeto Ablakwa, the President, sitting in a cafe at the train station in Paris, with practically no official security around him, and waiting to board a train, is of no moment. The State owes it a duty to be fussy about these things, even though the President may not be fussy about them.

“Is it acceptable to Hon. Ablakwa that the President cannot attend engagements that he is spending his valuable time to make because connecting flights get cancelled? Or that he has to wait around airports because flights have been delayed? Or, as happened in his last trip, he arrives at his destination from an overnight flight without any luggage of his arriving with him, such that he cannot even have a change of clothes to make the appointment he travelled for in the first place? It is a shame that an honourable Member of Parliament has no regard, whatsoever, for the security and safety of his President.”

Mr. Arhin earlier indicated that President Akufo-Addo travelled to Brussels on a commercial means of transport.

He explained that President Akufo-Addo travelled from Accra to Paris on Sunday, 19 June, on a commercial flight.

He pointed out that the Air France flight made a stopover in Ouagadougou, Burkina Faso before proceeding to the French capital.

“In fact, all of President Akufo-Addo’s 12-member delegation travelled commercial,” Mr Arhin said in the statement on Friday, 24 June.

“Upon arrival in Paris, President Akufo-Addo and his delegation travelled via train to Brussels to attend the European Development Days event, where, on Tuesday, 21 June 2022, he was a keynote speaker, and later held meetings with the President of European Investment Bank on two key subject areas.”