President Akufo-Addo has directed the Minister for the Interior, Ambrose Dery, to scrutinize factors that led to the death of social activist Ibrahim Mohammed and two others in Ejura.

In a statement, the president gave the interior minister 10 days to report findings into the shooting.

“The President is deeply saddened by the deaths of Ibrahim Mohammed, alias ‘Kaaka,’ Abdul Nassir Yussif and Murtala Mohammed,” the statement indicated.

The president also sympathized with the families of the deceased persons.

“He extends sincere condolences to the families of the deceased and wishes the injured a speedy recovery”.

But the Minority in Parliament has rejected President Akufo-Addo’s call for a probe.

“We will not accept any ministerial enquiry. We want an enquiry that has the true meaning of article 278 of the 1992 constitution,” Minority Leader Haruna Iddrisu said at a press conference on Wednesday, June 30.

According to him, an independent institution must conduct the investigations and not the Ministry for the Interior, which oversees the work of the Ghana Police Service.

“The state security cannot absorb themselves. The President must appoint a judge because definitely, we will reject any recommendations from any ministerial enquiry,” he stated emphatically.

Ibrahim Muhammed, aka Kaaka, was attacked by a mob, and he later died due to injuries.

Witness accounts showed that the deceased was ambushed in front of his house when he was returning home on his motorbike at about 1:30 am on Sunday, June 27, 2021.

Ibrahim Muhammed was rushed to the Ejura Government Hospital to receive medical treatment after the attack.

He was later transferred to the Komfo Anokye Teaching Hospital, where he died at midday on Monday, June 28, 2021, the Ashanti Regional Police Public Relations Officer (PRO), Godwin Ahianyo, told the media at a press briefing.

Providing an account of the incident, the widow of the deceased, Sahada Hudu, said she found him in a pool of blood after the attack.

“I thought my husband was driving away goats from the house at the time. Little did I know that he was being attacked. We saw him in a pool of blood. The people bolted as soon as we opened the door to check what was happening,” she recounted.

Before his death, Ibrahim Muhammed, aged 45, took to social media, where he posts critiques in the Ejura Municipality and other issues of national importance.

Meanwhile, police have arrested two persons in connection with the murder.

The suspects have been identified as Ibrahim Isaka and Fuseini Alhassan.

Scores of angry youth stormed the streets in Ejura to demand justice over the murder of Ibrahim Muhammed, aka Kaaka, a social activist.

However, the situation got out of hand at a police station prompting military reinforcements.

In the ensuing misunderstandings, at least six demonstrators were shot, and two died.

The other injured persons have been treated and discharged, but one person is still on admission at the Ejura Government Hospital. 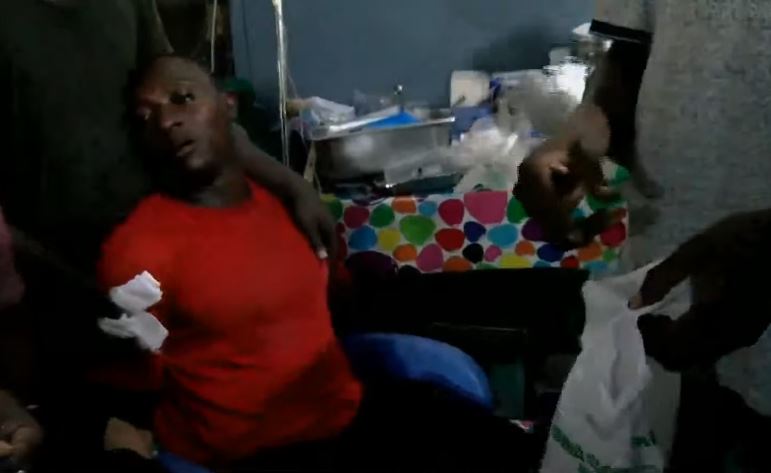 “Where the bullet hit, there was no way he could have survived because it hit the chest directly,” Medical Superintendent of the Ejura Government Hospital, Dr Mensah Menya, confirmed.

Ibrahim Issaka, alias Anyaas, and Fuseini Alhassan have been arrested for the alleged murder.