The date for the funeral of the late legendary actor Psalm Adjetefio has been made public by his family.

The final rites will be held at the forecourt of the defunct Ghana International Trade Fair Centre, La – Accra.

This became widely known after television presenter Barima Kaakyire Agyemang revealed the plans of the actor’s family via his Facebook page. 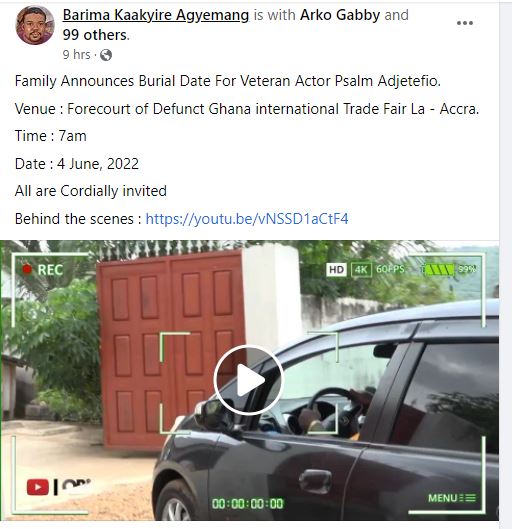 The burial service is expected to be attended by several stars in the entertainment industry and key personalities in the country.

The actor died in the early hours of Friday, 8 April  2022, at his home in Ayikuma in the Greater Accra Region.

He was reported to be battling a heart condition and was pronounced dead on arrival at the hospital.

The late actor, popularly known as TT, featured in many movies such as Papa Lasisi, The Chosen One, American Boy, and The Scent of Danger.

Before his death, the actor made a lot of headlines after he solicited funds to settle some bills, something that attracted a huge backlash from many Ghanaians.

Several donations were made to him.

However, he complained about challenges because the donations were not enough to settle his expenses.

Psalm Adjetefio, also known as TT, is a veteran Ghanaian actor who has featured in movies and videos. He is best known for being the lead character TT in the Ghanaian TV series Taxi Driver.

Psalm Adjetefio began his career as a trained teacher at PRESEC Staff School, tutoring pupils in the Ga language.

Recounting how he got into acting, he remembered when Emmanuel Appea invited him to star in a movie after a recommendation by a very good friend who saw his ability to interpret characters very well, and that landed him that role.

He said he was paid GHC 50 equivalent back then for his role.

The producer offered to pay him the equivalent of GHC30 instead of the proposed GHC 50. The producer said that Psalm was not well known even though he had featured in a couple of movies.

He accepted and shot the movie, and the producer was satisfied by Psalm’s performance.

Emmanuel Appea drove to Psalm’s house to congratulate him on the job and apologised for being cheated, considering his performance.

According to Psalm, the producer assured him of bigger payments in their subsequent projects, which never came to pass. After this, Psalm was offered another job by Emmanuel, and that was when he was invited to shoot Taxi Driver.

The series was a situation comedy but is synonymous with a talk show on wheels. This very versatile product was one of the most popular TV programs ever to hit TV screens in Ghana.

TT has made his mark in Ghana’s movie industry. With more than 20 years of acting experience under his belt, he is seen as a bridge between the old and new breed of actors.

He is credited with over 10 movies to his name.

Some of his movies include: Ultimate Paradise, Taxi Driver, A Stab In The Dark, and James Town Fisherman.