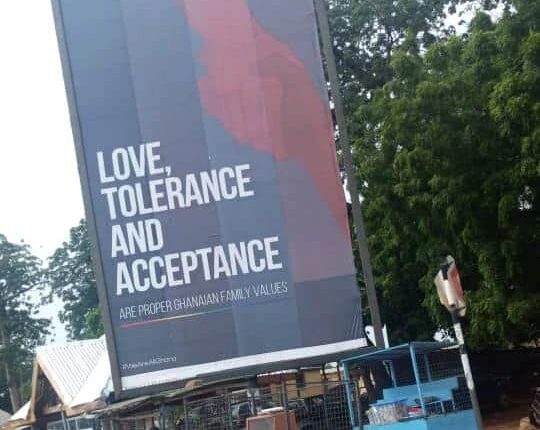 A group of MPs spearheading the passage of the anti-LGBTQ+ bill in Parliament has asked the police to pull down all LGBTQ+ billboards within the next 24 hours.

As part of the celebration of the International Day Against Homophobia, Biphobia, Transphobia, and intersex phobia (IDAHOBIT) and the anticipation for the celebration of Pride 2022, the LGBTQ+ community in Ghana erected billboards in three major cities in the country, including the capital, Accra.

One of the billboards is located on the Accra-Tema Motorway.

The billboard has inscriptions like “love, tolerance and acceptance are proper Ghanaian values”, “live and let’s live, love and let’s love”, among others.

However, addressing the media at the site of one of the billboards at the Accra Mall, MP for Ningo-Prampram, Sam George, and his colleague from South Dayi, Rockson-Nelson Dafeamekpor, called for the arrest and prosecution of persons behind the billboards.

“We are by this calling on the IGP to immediately, within the next 24 hours, carry out the necessary security operations to ensure that this billboard, which is an affront to the 1992 constitution, is taken down in conjunction with the MCE for the area,” Sam George demanded.

“We have deemed it important to show up here today to register in the strongest way our displeasure, our discomfort, and our abhorrent for this unholy, uncultured and untraditional advertisement that has been put on a very iconic road, the N1, the Tema Motorway,” he added.

On his part, the Convenor for the National Coalition for Proper Human Sexual Rights and Family Values, Mr Moses Foh Amoaning, disclosed that activities of the LGBTQI+ members are already endemic in certain second-cycle schools and thus must be resisted with alacrity.

He warned the diplomatic community in Ghana against hoisting gay pride flags this year, as happened in the past, since it’s a violation of Ghana’s laws.

President of the Coalition of Muslim Organizations of Ghana, Hajj Abdel-Manan Abdel-Rahman, said a massive campaign would be launched against MPs who are deemed to be frustrating the legislation soon.

The bill titled ‘The Proper Human Sexual and Ghanaian Family Values Bill (2021)’ holds severe punitive ramifications for those who are accused of belonging to the LGBTQ+ spectrum.

Members and advocates of the community could receive 10-year prison sentences. Individuals who also participate in violence against suspected LGBTQ+ persons could also be jailed for a year.

The Proper Human Sexual and Ghanaian Family Values Bill (2021) also proposes new legal definitions of Ghanaian family values, carnal knowledge, and what it means to have medical conditions that restrict nominal identification as male or female (the state of being intersex).

Other high-profile individuals supporting the bill include Apostle Opoku Onyinah, a former head of the Pentecost Church in Ghana, and other MPs who are not even named as sponsors.

The bill was first laid in Parliament on 2 August 2021 and is still going through the amendment process.

Opponents of the bill may not be a lot in Parliament or anywhere in Ghana, yet some of those who have made counterarguments to the bill happen to be high-profile Ghanaians who ordinarily possess social capital.

These individuals have spoken in either professional or personal capacities, citing why they are opposed to the bill before Parliament.

Members of the group opposing the anti-gay bill include lawyer Mr Akoto Ampaw; author, scholar, and former Director of the UN Economic Commission for Africa, Prof. Emerita Takyiwaa Manuh; a communications and media expert, Prof. Kwame Karikari; the Dean of the University of Ghana (Legon) School of Law, Prof. Raymond Atuguba; and the Dean of the University of Ghana School of Information and Communication Studies, Prof. Audrey Gadzekpo.