The family of the late former President Jerry John Rawlings has given its blessing to the decision to name the University for Development Studies (UDS) after him.

According to the family, it has never been against that decision.

“We have quickly checked with her excellency[Nana Konadu Agyeman-Rawlings], and I have her authority to inform you that the family has never been against this forward-looking suggestion and we would have absolutely no objection if your university can achieve that,” a member of the family and former diplomat, Mr Victor Gbeho, said on Monday.

This was when a delegation from the UDS, led by its Vice Chancellor, Prof. Gabriel Ayum Teye, visited the residence of the late President to commiserate with the family.

Responding, Prof. Teye said the statement of the family had been taken note of and that the university had taken an earlier decision in 2018 to do the honours, but something happened, and it was put on hold.

“So if it is coming up at this time, we have already given our blessing and also to say that the $50,000 that was donated (by Rawlings) … was meant to develop the university library and because of that the main library is now named after the former president and if you go there you would see a statue of him in front of the library,” he said.

He said the university was, however, ready for whatever decision that would be taken by the government to name the UDS after the first President of the Fourth Republic.

In April 2019, the government revealed plans under the Public Universities Bill plans to rename some four public universities.

Among the four was UDS. The school was to be renamed after Rawlings. 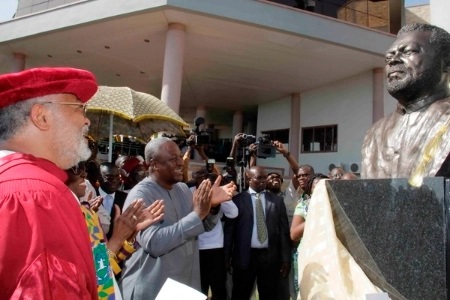 Days after the proposal was made, the former President released a statement rejecting the proposal saying “he had a long-standing principle not to have national monuments and facilities named after him.”

But twice after rejecting the offer to have UDS renamed after him, it seems his decision will be buried with him.

The conversation was resurrected by President Akuf-Addo after the former president’s death on November 12, 2020.

While paying a glowing tribute to the late former President Rawlings, the president said: “If Rawlings’ own sense of modesty probably compelled him to decline such a proposal while he was alive, let the people’s voice now prevail, on his passing, to enable us to put on record: The J. J. Rawlings University for Development Studies”.

The president urged the Governing Council of the University for Development Studies (UDS) to revisit his proposal to name the university after former President Jerry John Rawlings, who used his World Food Prize money of $50,000 to establish the university.