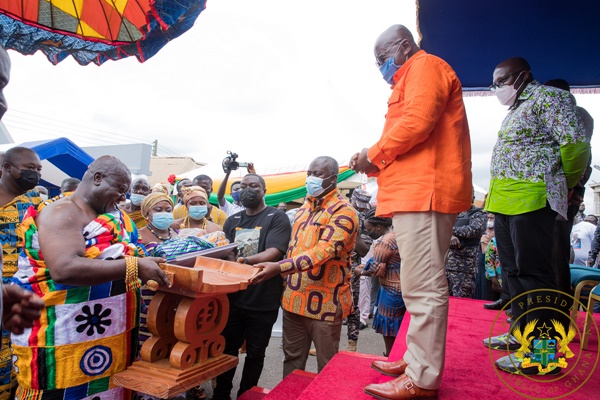 Redevelopment Of Aburi Gardens In The Offing – Akufo-Addo

President Nana Addo Dankwa Akufo-Addo has indicated that the Aburi Gardens will soon be redeveloped, as part of the government’s plan to boost the country’s tourism potential.

President Akufo-Addo made this known on Wednesday, 6th October 2021, when he paid a courtesy call on Nana Otuobour Djan Kwasi II, the Chief of Aburi, at the commencement of day 2 of his 3-day tour of the Eastern Region.

The President revealed that he has already held discussions with the Minister for Tourism, Arts and Culture, Hon. Ibrahim Awal Mohammed, about the redevelopment of the Aburi Gardens, which has resulted in the Minister for Finance, Ken Ofori-Atta, including the project in the yet-to-be-read 2022 budget.

“Aburi Botanical Gardens is of great importance to me. Indeed, the history of the Gardens is known to us all. It is important to the country, and we will protect its heritage for future generations. Nana, you made mention of Kew Gardens. The time has come for the world to also know about the potential of Aburi Gardens.”

Nana Otuobour Djankwasi II, Chief of Aburi, who is also the acting President of the Akuapim Traditional Council, expressed his appreciation to the President for the massive infrastructural development that has taken place in Aburi since the assumption of office of President Akufo-Addo in 2017.

He highlighted the asphalting and redevelopment of the Akuapem inner roads, the new hospital in Aburi, and several other government projects, as examples of some of the projects undertaken by President Akufo-Addo’s Government, which have been extremely beneficial to residents of Aburi.

President Akufo-Addo also inspected ongoing work on the KOM Presbyterian Clinic, which is part of a €40 million contract award to Messrs Contracta Construzion Italia S.R.L. for the retooling and equipping of four selected health facilities in the Eastern Region.

This project, which officially commenced in October 2019, also involves work on the Atibie Hospital in Kwahu, Tetteh Quarshie Memorial Hospital, and the Kibi Government Hospital.

With the project nearly ninety per cent (90%) complete, it is expected to be completed on 29 th November 2021.