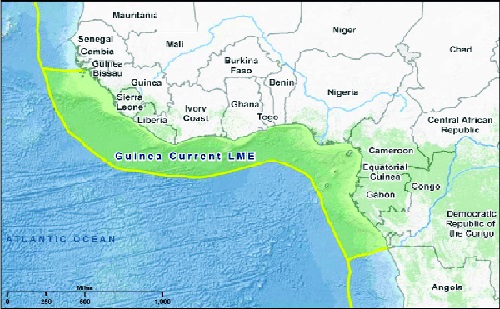 For many years, the Council for Scientific and Industrial Research (CSIR) has been conducting projects aimed at increasing productivity in the fish and fisheries sector.

These projects are under the Ministry of Environment, Science and Technology (MEST). MEST is currently made up of the CSIR, Environmental Protection Agency (EPA), the Ghana Atomic Energy Commission (GAEC), Town and Country Planning Department and a project called the Guinea Current Large Marine Ecosystem (GCLME).

This United Nation’s project, the GCLME is designed to formulate policies and action for eliminating the causes of serious degradation of coastal environments, linked watersheds, loss of biodiversity and food insecurity.

The first meeting of the Ministerial Committee of the Gulf of Guinea Large Marine Ecosystem (GOG-LME) Project took place in Accra, Ghana, on in July, 1998. At its second meeting in Accra this year, the Committee of Ministers of the Environment accepted Ghana’s offer to host the new regional body.

The project, originally initiated by the governments of six countries, now covers 16 countries affected by the Gulf of Guinea Large Marine Ecosystem that is part of GCLME.

The original countries were La Cote DÕIvoire, Ghana, Togo, Benin, Nigeria and Cameroon. The coastal and marine environment Guinea Current Large Marine Ecosystem is vital to the socio-economic development of 16 countries all of which are influenced by the Guinea Current.

It is one of the world’s richest in marine resources, with some 239 fish species. It is continually being polluted from land- and sea-based sources such as industrial waste and the associated human activity is eroding coastlines.

These and the depletion of resources are destroying vital spawning coastal habitats and their flora and fauna. A Guinea Current Commission may be better placed to spearhead the protection of this area of vital importance to its tens of millions of inhabitants.

The project aims to assist states, acting collectively, to protect the Guinea Current region’s estimated 300 million people (half of whom live on the coast) from environmental degradation, food insecurity, depletion of fishery stocks and from land-based pollution.

The executive secretary of the Interim Guinea Current Commission and regional coordinator of the GCLME project, Stephen Maxwell Donkor says that “For the ordinary fisherman and fish consumer on the Guinea Coast, it is to be hoped that the application of the Large Marine Ecosystem Approach would lead to restored fishery catches, reduced pollution and improved human health and a rehabilitation of the coastal environment to reach a balance with the rapidly increasing population with resultant urban conglomeration as well as increased industrialisation, especially the emerging oil and gas production.

“The bottom line will be the integrated utilisation of marine and coastal resources on a sustainable basis even in the face of inevitable Climate Change impacts.”

The LME is a way to manage large areas of ocean of distinct ecosystems based on topography, water depths and currents, productivity and interactions of food chains.

Of the 64 recognisable LMEs in the world, seven of them are in Africa: the Agulhas, Benguela, Canary, Guinea, Mediterranean, Red Sea and Somali.

This will provide support for the transition to a country owned, independent and permanent Commission for the management of the marine and coastal resources of the Guinea Current Large Marine Ecosystem.

One of the requirements to complete the transition of the Interim Commission to a permanent commission is implementation of the GCLME SAP, a negotiated document that describes policy, legal and institutional actions and investments to attend to regional priority problems on the marine environment.

This year, a caucus of African LMEs was formalised to provide a platform for closer cooperation and for the discussion of common concerns, and how these could be redressed.

The meeting’s chair was designated to preside over the Caucus for one year to ensure institutional stability, after which the chairmanship will rotate among LMEs.

Managing the LME requires policies and action plans as well as investment such as research and monitoring vessels and equipment.

It so happens that the project is also promoting mariculture, a specialised branch of aquaculture involving the cultivation of marine organisms for food and other products in the open ocean, an enclosed section of the ocean, or in tanks, ponds or raceways which are filled with seawater.

Sanitising and restoring the marine environment is conceptually good. We should be concerned, among other things, about the dumping of toxic waste on our shores and oil spills.

The recent oil spill in the Gulf of Mexico raised a lot of concern from the United States government, environmentalists from fisher folk whose lives were threatened. We need to feel concerned about our seas as well.

There is little doubt the project GCLME will produce a lot of spin-offs for the region. It is gratifying to note that Ghana is hosting the projects. It would succeed, if there is political support from the governments of the region as well as the people.

The author’s are with the Food Research Institute of the Council for Scientific and Industrial Research.