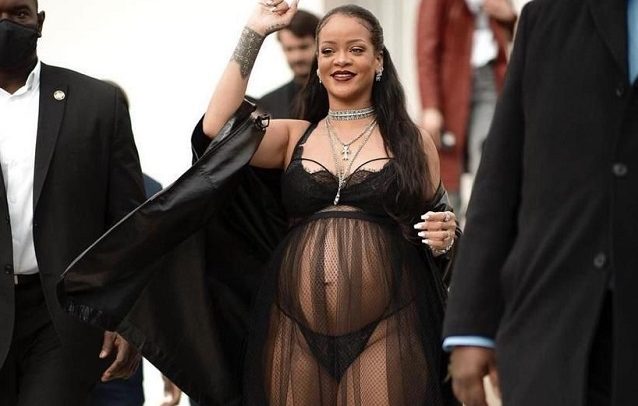 Rihanna on Friday made her first public appearance since welcoming a baby with her boyfriend ASAP Rocky, according to videos posted on social media.

In one brief clip, Rihanna can be seen walking out into a crowd in London at the Wireless Festival dressed in black, while Rocky gave a vibrant performance, according to Metro.

It was the first day of the festival, taking place this year at Crystal Palace Park in London.

At the event, she wore a black Prada puffer jacket garnished with feather details, Elle reported. Rihanna wore her long, black hair down and coupled the look with black leggings and a silver necklace.

The two were also captured at a barbershop ahead of Rocky’s set. Rihanna wore black sunglasses and looked on as Rocky got a trim. Fans gathered outside and in the shop to get a peek of the superstar couple, according to social media posts on Instagram.

Rihanna and Rocky announced the pregnancy in January, revealing the news through a photo shoot that highlighted her baby bump.

Speaking with Vogue in May for its cover story, Rihanna said she and Rocky didn’t necessarily plan to have a baby but were “certainly not planning against it.”

“I don’t know when I ovulate or any of that type of shit. We just had fun,” she said. “And then it was just there on the test. I didn’t waste any time. I called him inside and showed him. Then I was in the doctor’s office the next morning and our journey began.”

And in May, the 34-year-old Fenty Beauty founder gave birth to a baby boy in Los Angeles, according to multiple outlets.

The couple has been dating for about two years.

Since giving birth, Rihanna has been resting in Los Angeles, People reported.

“Rihanna is doing well. They are very excited to be parents. Rihanna is already a wonderful mom,” a source said, according to the outlet.