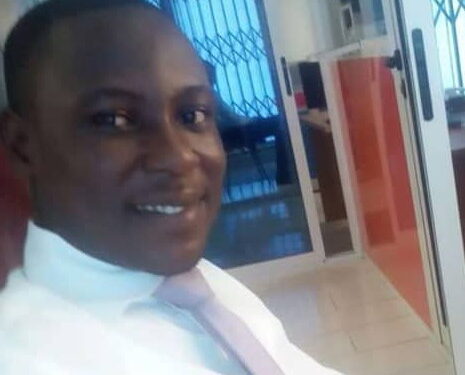 On Friday, 24 June 2022, scores of fresh lawyers gathered to celebrate their call to the bar, but one of their colleagues was conspicuously missing as he battled multiple gunshot wounds at the Tema General Hospital.

Daniel Ledi, 30, was mercilessly shot four times by gun-totting robbers at his Mobile Money Shop located at Adjei Kojo, near Ashaiman, on Thursday evening, less than 24 hours before graduation.

His family, who had prepared to celebrate his achievement, were rather filled with tears of sorrow as he lay motionless with critical injuries to his head and a fractured arm.

The Daily Graphic reports that Daniel’s father, Victor Ledi, had travelled from Dzodze in the Volta Region to Ashaiman, where his son and daughter lived to partake in the graduation celebrations.

The father narrated that Daniel went out to make arrangements for drinks that would be used for refreshment and decided to pass by his Mobile Money Shop to close for the day.

The money transaction centre is said to be about half a kilometre from their residence, but Daniel kept longer than expected in returning.

After waiting for a while, the father said they suddenly “heard shouts of ‘armed robbers, armed robbers!’”

Some family members rushed towards the Mobile Money Centre and saw some assailants who had pointed guns at Daniel.

The father said they were struck by fear and a state of confusion as the incident unfolded before their eyes from a distance, like a movie.

According to him, the robbers shot four times at his son and later bolted quickly with a sum of GHC3,000, which they snatched from Daniel.

The victim was quickly rushed to the Tema General Hospital, and the case was reported to the Tema Regional Police Command, who dispatched police officers to the scene.

The law enforcement agency has launched an investigation into the robbery incident as Daniel battles for his life at the health facility.