Headmaster of St Charles Lwanga Roman Catholic Junior High School in the Saboba District of the Northern has been remanded into police custody for his involvement in the drowning of nine students.

Mr Emmanuel Chinja, 43, has been slapped with manslaughter and scheduled to reappear at a Tamale District Court on November 29, 2021.

Manslaughter is a first-degree felony that could attract a sentence of life imprisonment if found guilty.

When the case was called on Monday (November 15), the defence counsel pleaded with the court to grant his client bail.

His reason was that the accused voluntarily submitted himself to the police hence had no intention to jump bail should he be granted.

But the judge, Amadu Issifu, declined the appeal for bail.

Why the headmaster had been dragged to court

The suspect was arrested and detained on Saturday after it emerged that the students drowned after he allegedly sent them to harvest rice on his farm.

A total of 31 students embarked on the mission but their boat capsized on Friday as they crossed the Oti river back to the school.

The incident is said to have occurred at Buntu, a farming community near Saboba.

Officials from National Disaster Management Organization (NADMO) and some local residents managed to retrieve the bodies.

The headmaster went into hiding shortly, for fear of his life before reporting himself to the police.

David Takah, a brother of the headmaster, reported that the family did not know his whereabouts and all efforts to contact him had failed.

At the Cape Coast Teaching Hospital, the biggest referral hospital in the Central Region, the leading cause of injury deaths were road traffic injuries (42.9%) and drowning (30%), according to research spearheaded by a Senior lecturer of surgery at the University of Cape Coast Dr Martin T. Morna.

In the Greater Accra Region, the Ghana Police Hospital have issued cautions to the public in the past to be safety conscious after receiving bodies of people who got drowned at beaches close to the health facility.

The Pathology Department of the hospital recorded 68 persons drowning in 2017, with eight being females.

A total of 48 drowning cases had been recorded, 10 of them being females as of November 2018.

Notable drowning incidents within the year

In October, at least four other young people died when their boat capsized on the River Offin in the Ashanti Region.

Their bodies were pulled from the river after nearly three days of searching for those missing.

In March 2021, about 13 teenagers drowned at the Apam Beach in the Central Region. 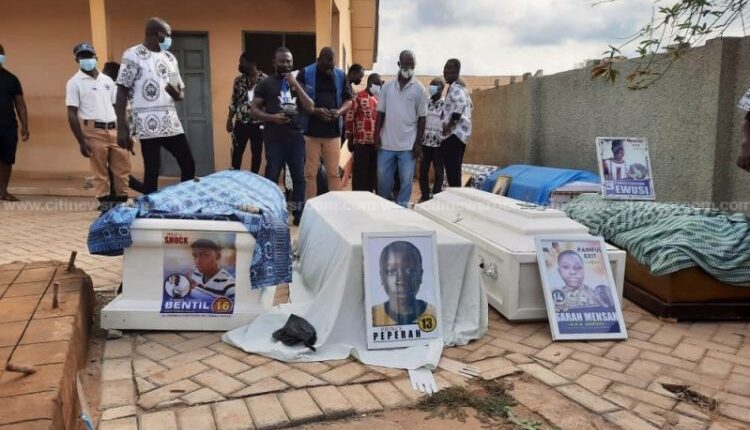 According to a police report, while the children were swimming, a high tide swallowed them up.

The timely intervention of a Good Samaritan saved the lives of two of them as they were rescued and sent to the St. Luke Hospital to be attended to.

But the rest could not make it.